The Global CCS Institute co-sponsored the 3rd Congresso Brasileiro de CO2, held 28-29 April in Rio de Janeiro, Brazil. In this insight, Meade Goodwin, Senior Advisor – Capacity Building and Public Engagement for the Americas, reports on the conference and Institute activities in the region.

The Global CCS Institute co-sponsored and participated in the April 28-29 3rd Congresso Brasileiro de CO2, hosted by the Brazil Institute on Petroleum, Gas and Biocombustives (IBP).

First begun in 2011, the conference brings together participants from government, industry and academia from across Brazil with speakers from around the world, including from Denmark, the Netherlands, Norway and the United States. The diversity of speakers and participants at the event showed the broad interest in CO2 management in Brazil. 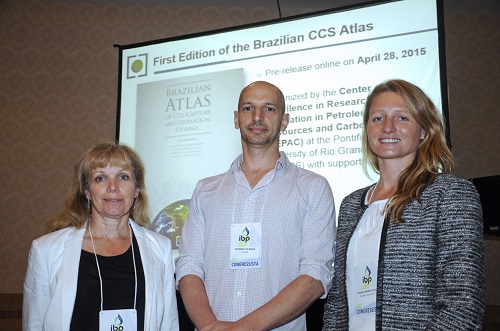 It was fitting to hold the conference in Rio de Janeiro, as the state-owned energy company PETROBRAS is headquartered in the city. At the Congress, PETROBRAS confirmed that an additional floating production, storage, and offloading (FPSO) vessel, the Cidade de São Paulo, is now in operation, injecting around 0.7 million tonnes of CO2 per annum. The FPSO Cidade de São Paulo began injection in the Sapinhoá Field.

This project is very similar to the Lula Oil Field CCS Project, and like the Lula project, this FPSO is based in the Santos Basin pre-salt region. The Santos Basin Pre-Salt Cluster (SBPSC), approximately 300 km/186 miles off the coast of Rio de Janeiro, is one of the largest oil field discoveries in Brazil, with estimated recoverable reserves of 8.3 billion barrels of oil equivalent. The FSPO Cidade de Paraty has been injecting in the Lula Nordeste field since 2014. In both projects, the captured CO2 is compressed and re-injected into the producing reservoir for EOR. The sea floor lies around 2,000 metres below the FPSOs, making these projects the deepest offshore CO2 injection wells currently in operation. The produced oil is offloaded into tankers, transported to shore, and the CO2 injections will be monitored. Brazil not only leads the world in offshore operational EOR projects, it is now second to China in terms of CCUS projects in a developing country.

Petrobras has been injecting CO2 for EOR since 1987 and has developed CCUS knowledge from previous projects. The Global CCS Institute has been working in Brazil since 2011, and at the conference, Dr Elizabeth Burton, the Institute’s General Manager-The Americas, gave a keynote address at the opening plenary. Dr Burton gave an update on the status of CCS globally, focusing on the Americas and in particular Brazil, noting the launch of the Brazilian Atlas of CO2 Capture and Geological Storage.

The Institute has enjoyed working with its Brazilian colleagues and has supported initiatives such as:

For more information on the Institute’s engagement in Brazil, see Dr Burton’s presentation below.

The Institute looks forward to its continued collaborations and progress on CCUS in Brazil.