On 7-8 June 2015, Germany hosted the meeting of the G7 (Group of Seven) Heads of State and Governments. Leaders from Canada, France, Germany, Italy, Japan, the UK, the European Commission and the US met in Schloss Elmau, Bavaria to discuss progress on a number of topics, including climate change and energy security, following on from the last meeting of G7 Energy Ministers in May. 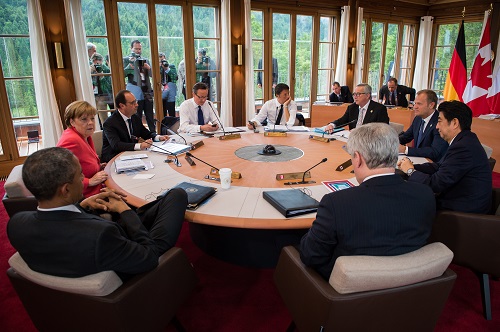 On climate change, all G7 countries affirmed their strong determination to adopt an ambitious agreement at the international climate negotiations in Paris (COP21) in December.

In the joint leaders’ declaration, they committed to “Emphasize that deep cuts in global greenhouse gas emissions are required with a decarbonisation of the global economy over the course of this century. Accordingly, as a common vision for a global goal of greenhouse gas emissions reductions we support sharing with all parties to the UNFCCC the upper end of the latest IPCC recommendation of 40 to 70 % reductions by 2050 compared to 2010 recognizing that this challenge can only be met by a global response”.

The leaders also emphasised they are “..doing our part to achieve a low-carbon global economy in the long-term including developing and deploying innovative technologies striving for a transformation of the energy sectors by 2050 and invite all countries to join us in this endeavor. To this end we also commit to develop long term national low-carbon strategies”.

The reference to the Intergovernmental Panel on Climate Change (IPCC) mitigation report that came out in November 2014 is of particular relevance for carbon capture and storage (CCS). The IPCC report demonstrates the critical role CCS can play in reducing emissions in the most cost-effective scenarios. Results using extensive modelling suggest that excluding CCS from the technology options will increase the cost of mitigation by 138%. Furthermore only four out of 11 models could meet the internationally agreed target of limiting average global temperature rise to 2 degrees celsius by the end of the century without CCS.

CCS was also explicitly mentioned in the Communique of the last meeting of G7 Energy Ministers which took place in Hamburg, Germany on 11 and 12 May 2015. The Communique referenced the need to encourage CCS and collaboration on large scale demonstration projects:

“We recognize that fossil fuels will remain an important part in the energy mix for some time, as we progressively reduce greenhouse gas emissions in our energy systems. In this context, we encourage countries which opt to make use of carbon capture, use and storage to collaborate on large-scale demonstration projects and countries which opt to develop and use shale gas and other unconventional resources to collaborate on safe and responsible development.”

These statements add to an increasing chorus of respected voices making the case for CCS, this can only be helpful as the eyes of the international community increasingly turn to the crucial international climate negotiations at COP21 in Paris to take place in December.