The third meeting of the Asia Pacific Carbon Capture and Utilisation (CCUS) Legal and Regulatory Forum was held in Tokyo, Japan on 27 January 2016. Presenting at this meeting was Ian Havercroft, Global CCS Institute Senior Adviser – Legal and Regulatory. In this Insight Ian reports on the discussions and some of the latest developments for Japan in particular.

In 2015 the Institute established the Asia Pacific CCUS Legal and Regulatory Forum to offer a new, more regionally-focussed opportunity for discussing law and regulation and the development of models to support the deployment of carbon capture and storage (CCS). Previous meetings in Melbourne and Beijing in 2015 brought together a number of national policy, legal and regulatory experts and enabled a timely and thorough discussion of the critical issues and developments in each jurisdiction.

A third meeting of the Forum was hosted by the Institute in Tokyo on 27 January and was the first workshop of its kind aimed at addressing CCS-specific legal and regulatory issues for Japan. The agenda focussed on Japan’s policy ambitions for the technology and the current regulatory model for sub-seabed storage, as well as several broader contextual legal and regulatory themes pertinent to the deployment of CCS in Japan and the wider Asia Pacific region. 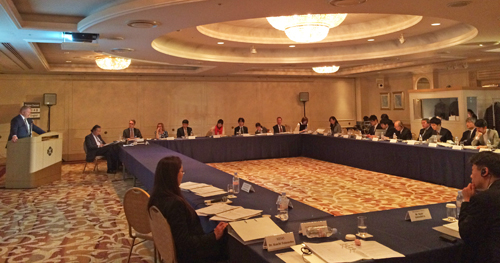 The 2016 APAC Legal and Regulatory Forum was held in Tokyo, Japan

With participants drawn from many of the country’s CCS stakeholder organisations, including key policymakers, regulators, academics, industry representatives and lawyers working in private practice, the event enabled a detailed discussion of the critical issues to be addressed in Japan.

Japan’s standing in both the Institute’s Legal and Regulatory​ and Policy​ Indicators suggests that, aside from a supportive national policy environment for the technology, some aspects of the domestic legal and regulatory framework have yet to be fully elaborated. The workshop’s early sessions would appear to support this view, with presenters highlighting the critical role for the technology in supporting Japan’s climate change mitigation efforts and the framework permitting model developed to support storage in the sub-seabed.

The foundation of Japan’s legal and regulatory regime is the amended national marine pollution law, which implements the amendments to the London Protocol and enables the domestic regulation of CO2 storage under the seabed. The permitting model, which was examined in detail during the workshop, obliges potential operators to obtain a permit from the Minister of Environment in order to undertake sub-seabed storage activities. Additional obligations relating to site selection, monitoring techniques and financial and technical capability are further aspects of the application process, which when taken together result in a model aimed at promoting the environmentally conscious deployment of the technology.

Notwithstanding this early development, Japan’s regulatory framework will likely require further development for it to offer a truly comprehensive CCS-specific model. The ensuing sessions sought to consider the necessary developments in greater detail, as well as the lessons learned from other jurisdictions.

Role of international models and examples of best practice

Presentations and discussion in later sessions centred upon the approach to CCS-specific law and regulation, which had been adopted in other jurisdictions around the world. Particular focus was given to those early regimes identified in the Institute’s Legal and Regulatory Indicator as possessing CCS-specific models which were applicable across most parts of the project life cycle, notably the United States and Australian federal regimes, and the European Union’s CCS Directive.

Several aspects of these regimes were of significant interest to Japanese stakeholders, including the legal basis for national models, the role of regulatory agencies across the project life cycle, and the definitions and terminology used within legislation. The sessions once again highlighted the importance of international dialogue, a demand for knowledge transfer and the importance of sharing of experiences between national regulators and governments.

Critical issues and next steps

While discussion at the workshop highlighted a number of opportunities for strengthening Japan’s legal and regulatory model, the issues of public engagement and long-term liability were two issues which were discussed in greater detail during the penultimate and final panel sessions. Both issues were similarly highlighted as low-scoring in the Institute’s Legal and Regulatory Indicator assessment process.

The issue of long-term liability, in particular, has yet to be fully addressed in Japan’s domestic legal framework for the technology. Under the existing marine pollution law, operators will bear a number of administrative obligations relating to monitoring throughout the project life cycle. Less clear however, is the allocation of responsibilities following the closure of a storage site and for long-term storage. It will be important for Japan, as with many countries with similar policy ambitions for the technology, to address this topic as part of its work to enhance its legal and regulatory model.

The meeting revealed the considerable interest in legal and regulatory issues in Japan, as well as strong desire amongst the participants to discuss and share experiences. The Institute will continue to facilitate dialogue in this space and assist Japanese stakeholders to progress the development of a comprehensive regulatory model.