This was to be the week of action, as it always is, when the Ministers, dignitaries and the celebrities with a cause touch down. It’s also when the negotiations have to drive to a conclusion; the work has to get done after the posturing and agenda agreeing process of week 1.

Word has it that Leonardo DiCaprio made an appearance. I missed it. But much bigger splashes were made by Arnold Schwarzenegger (I did see him), Michael Bloomberg and a whole bunch of State Governors from the US who were there to proclaim that the US is still in, albeit at a State level. A number of additional US accredited attendees wore and freely handed out small “America’s pledge” lapel badges which proclaimed: “#we are still in”, just in case anyone thought the US was out. 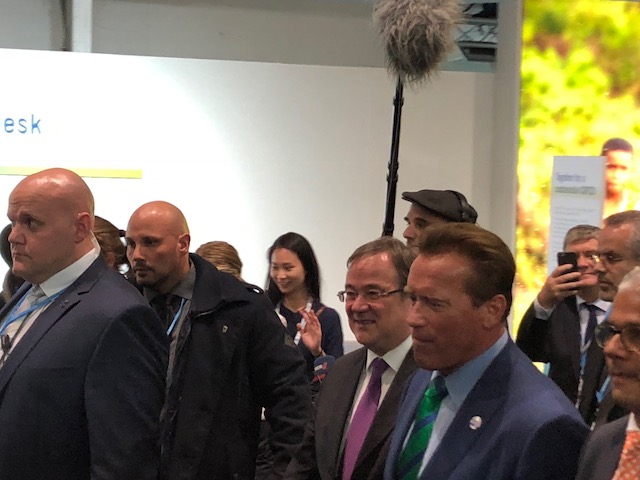 It was the week when Michael Bloomberg committed US $50 million to end the use of coal and Canada and the United Kingdom announced the “Powering Past Coal Alliance”, attracting a further 17 countries as end-coal affiliates along with a further six states and provinces. It is notable that after the UK and Canada, most of the remaining 17 countries in the alliance already have limited or no coal fired generation capacity while the key coal using countries for power generation – China, the US and Germany – are not parties to the Alliance. Very reassuringly, and importantly, the Alliance specifically commits to the phasing out of ‘existing traditional coal power… and a moratorium on any new traditional coal power stations without carbon capture and storage’ (bolding added). The declaration can be found here

And this is the point. CCS is definitely in the conversation. Our media conference to launch the 2017 Global Status of CCS report was very well attended and led to significant media coverage. Our CCS side events despite the trauma of separate campuses – see my previous article – were very well attended and not just by the CCS devotees. Our booth in the second week was regularly visited by people wanting a lot more information on CCS and there was a much higher enquiry level from many country officials about CCS than we have previously encountered.

This is not so surprising.

The United Nations Environment Program (UNEP) report released in the week leading into COP23 examining the ‘gap’ between Paris objectives and current trajectory certainly impacted the thoughts of many. Current commitments and policies of all countries leave us a long way from the 2oC and 1.5oC objectives. As countries do the calculations and examine the options for massively increased abatement ambitions, they inevitably are looking beyond the power sector and renewables. CCS is necessary and the realisation is dawning on many. Industrial emissions and the new energy economy is much bigger than just renewables and other solutions are necessary as well.

So what happened in the negotiations? This was the COP to progress the creation of a rule book to implement the Paris Agreement. Approval is the task for the next COP in Katowice, Poland next year. It is also the year when the first stock take will be commissioned and if the UNEP report is anything to go by, the result won’t be pretty.

The parties got the job done in the end and my colleague John Scowcroft will cover the detail of the negotiations in a separate note. In my view nothing happened that is detrimental to CCS. So here’s a few personal observations:

COP23 continued the positive sentiment toward CCS that we detected at Marrakech last year. But more work is ahead of us to move CCS into the mainstream. The Institute is up for this challenge and our recent re-structure and new strategic plans is exactly targeted at this.

With an impactful strategy, a growing membership base, and an influential cast of influencers promoting our cause, we believe the CCS star will continue to rise over the 12 months.