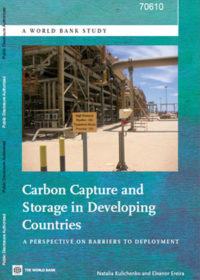 Carbon capture and storage in developing countries: a perspective on barriers to deployment

CCS could have significant impact as a carbon mitigation technology in greenhouse gas emitting industries. Given the nascence of CCS technology, with only eight large-scale integrated projects in the world (Global CCS Institute 2010), significant challenges still must be overcome for large-scale deployment, such as addressing technical issues of integration and scale-up, legal and regulatory requirements to reduce investor risk, policies to create market drivers and mitigate economic impacts, including increases in electricity prices, and financing mechanisms to facilitate investment in the technology.

This report does not provide prescriptive solutions to overcome these barriers, since action must be taken on a country-by-country basis, taking account of different circumstances and national policies. Individual governments should decide their priorities on climate change mitigation and adopt appropriate measures accordingly. The analyses presented in this report may take on added relevance, depending on the future direction of international climate negotiations and domestic legal and policy measures, and how they serve to encourage carbon sequestration. Both international and domestic actions can further incentivise the deployment of CCS and its inclusion in project development. Incentives to promote CCS include adopting climate change policies that could provide revenues for CCS projects, but it is likely that a combination of domestic and international mechanisms will be required, alongside carbon revenues, to kick-start CCS project development and reduce investor risk in developing countries in particular.

This report assesses some of the most important barriers facing CCS deployment within the context of developing and transition economies. The selection of the case studies is based on several criteria, including the level of reliance on fossil fuels for power generation and the level of interconnection of electricity networks. The case studies selected for this analysis are the Balkans and Southern African regions. Many countries within the Balkan region are considered transition economies, a status recognised as different from middle-income and low-income developing countries. However, for the purposes of this report, countries within both regions are referred to as developing countries.

The report presents the results of a techno-economic modelling exercise to investigate the impacts of a number of policies on CCS deployment in the power sector in the Balkan and Southern African regions. The analysis examines the effects of such policies on energy technology portfolios in the two regions, including the level of CCS deployment, the average generation costs, the CO2 emission reductions, and the costs of the policy. Policies considered in the analysis include the introduction of a carbon price (introduced into the model incrementally at the following three levels: US$25/ton CO2, US$50/ton CO2, and US$100/ton CO2) the availability of enhanced hydrocarbon recovery, and technology-specific deployment targets. However, it should be noted that other measures that are not included in the model, but discussed in other sections of the report, could promote the development of CCS, such as government supporting policies, as seen in the United States, United Kingdom, European Union and Australia.