There is no integrated policy or legislation currently to specifically deal with CCS in the Republic of  South Africa (South Africa). However, in recent years South Africa has moved towards adopting a climate change policy, and CCS is likely to be central to that policy.The Long Term Mitigation Scenario Study (LTMS) highlighted CCS as being a potential method of CO2 emissions mitigation for South Africa. Following this study, the Department of Environmental Affairs and Tourism (DEAT) stated that one of its objectives was "exploring and developing CCS forcoal fired power stations and all coal-to-liquid (CTL) plants, and not to approve new coal fired power stations without CO2 capture readiness". DEAT also stated that a climate change policy is expected to be implemented by 2010 and a legislative, regulatory and fiscal package is planned to be introducedby 2012.

It is therefore clear that CCS is expected to play a vital role in South Africa's drive to mitigate its CO2 emissions. The South African government has declared CCS to be a national research priority and this commitment is underlined by South Africa's membership of the CSLF since 2003.The recently established South African National Energy Research Institute (SANERI) launched a National Centre for CCS on 27 March 2009. This research centre will drive CCS initiatives in South Africa, with the ultimate goal of undertaking a CO2 injection experiment by 2016 and the constructionof a CCS demonstration plant by 2020. The Centre receives funding from the British High Commission, the Norwegian Government and from industry. 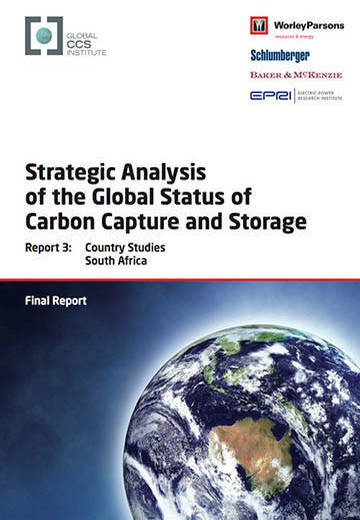