Brown coal (lignite) is an abundant and low-cost source of global energy but its high water content makes it a particularly emissions intensive resource. Efficient exploitation of brown coal resources depends on emissions reduction technologies such as carbon capture and storage (CCS). To explore the potential for CCS on brown coal a pioneering international project led by Australian innovators has set up a pilot plant at the AGL Loy Yang power station in Australia's La Trobe valley. In this Insight, the Global CCS Institute's Senior Adviser for Carbon Capture, Asia–Pacific, Dr Tony Zhang discusses the PICA project and its importance for the future of brown coal.

Importance of brown coal for Victoria

Victoria has abundant brown coal (lignite) reserves, one of the largest and lowest cost energy sources in the world. The endowment of such resources enables Victoria to produce electricity at relatively low cost, albeit with relatively high greenhouse gas emissions. The installed capacity of lignite-fired power stations is approximately 6.3 GW, which makes up a major proportion of Victoria’s electricity. It will be essential for the lignite industry to utilise more efficient technologies if it is to continue to supply Victoria with low cost electricity and underpin economic growth in the Latrobe Valley.

Importance of CCS to lignite

Fossil fuels will continue to play a significant role in meeting the global energy demand. Lignite power stations generally have low thermal efficiencies, and thus have larger carbon footprints than more efficient black coal power stations. In a carbon-constrained world, continued use of such fossil fuel resources requires the adoption of carbon capture and storage (CCS) to reduce its carbon footprint. CCS is capable of reducing the emissions of lignite-based power stations by up to 90%.

The installation of CCS at a coal-fired power station requires significant capital investments and the capture process incurs significant energy penalty which increases the cost for electricity generation. The widespread commercial deployment of CCS requires the reduction of carbon capture cost, which usually comprises the majority (70-90%) of the whole chain CCS cost. Industry, research institutions and other organisations have been working on ways to reduce cost for carbon capture. In addition to cost, there are other technical issues to be addressed for the deployment of CCS. For example, the presence of impurities in flue gas may have a substantial impact on the design and operation of a carbon capture plant.

The flue gases from Victorian lignite power stations have some unique features which call for local carbon capture demonstration activities designed to accumulate knowledge and learning in this specific context. Such pilot work would pave the way for the future deployment of CCS in Latrobe Valley, by acquiring more local expertise and accumulating more site-specific know-how for adaptation and operational issues.

In the following, a carbon capture pilot project is included as an excellent example case study to highlight the importance for continued CCS R&D for lignite.

AGL Energy Limited, IHI Corporation, CSIRO and Brown Coal Innovation Australia have been working together to establish a carbon capture pilot plant in the PICA project since 2014. The project aims to reduce the capture cost by 40% by investigating solvents, equipment and process design. Another objective of the project is to investigate the effects of impurities, such as sulphur oxides (SOx). Australian coals (both black and brown) are very clean by world standards, so local power stations are not equipped with desulfurisation units. Still, the flue gases contain concentrations of SOx that are normally not tolerated by the CO2 capture process.

The capture pilot plant is designed and manufactured by IHI Corporation. It is solvent-based and has a CO2 capture capacity of 0.5 tonnes per day (tpd) which is equivalent to electrical output of approximately 0.025 megawatts (MW). Process improvements will be investigated in three aspects:

To be more specific, the project will study the following factors:

The pilot plant has been delivered to AGL Loy Yang power station and construction and interfacing with the power station is now complete; the launch is expected in early 2016. Following commissioning, a two-year operation will be conducted to investigate the aforementioned parameters.

A key and unique feature for this project is the breadth/dimension of international collaboration. This project involves multiple partners from different industries and different countries. An organisational chart of the project is presented below. 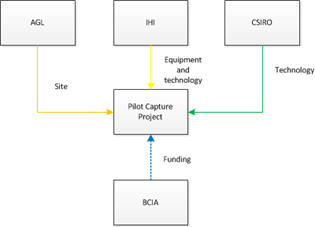 The role of each party in the project is listed as follows:

The Commonwealth Scientific and Industrial Research Organisation (CSIRO) will support the design work, commission, and operate the IHI plant at AGL Loy Yang power station, and evaluate its own proprietary capture system.

Design, construct, transport, and operate the 0.5 tpd pilot plant based on its own proprietary technology in Japan.

Among the project partners, CSIRO brings great industrial R&D strengths in carbon capture. This project provides an opportunity for CSIRO to intensify its collaboration with industry. It is also a recognition of the leading carbon capture R&D capabilities in Australia. IHI Corporation aims to utilise the local expertise built up around lignite and carbon capture. Its business strategy includes the development of carbon capture technology. AGL, as a power generator, will develop learning in project management, technology development and CCS deployment for lignite power stations in the Latrobe Valley, Victoria. As a member-based company, BCIA’s aim is to support innovations that reduce the environmental impact – and deliver social and economic benefits – from sustainable use of lignite.

This collaboration between a power generator, a technology supplier, and an R&D organisation is not only a cross-border one between Australia and Japan, but also one along the innovation chain. It was observed that there is an increasing appetite for this type of collaboration for CCS development. Consider for example, the U.S. Department of Energy-funded CCS R&D activities outside the U.S.

This project is a great example of international collaboration and technology innovation. Victoria hosts substantial lignite reserves, and more importantly, according to IHI Corporation it is "a focal point for leading-edge research in this area". Therefore it is critical to build on this local expertise to continue the cause of emission reduction technology development for brown coal.