Alex Zapantis (General Manager Commercial) and our Tokyo team visited the Osaki CoolGen facility this week, where the President of Osaki CoolGen, Mr Kenji Aiso and his team provided an update on progress (see picture below).

The Osaki CoolGen facility is a 166MW oxygen blown Integrated Gasification Combined Cycle (IGCC) power plant located in the Hiroshima Prefecture of Japan. The first phase of the project, construction and demonstration of the IGCC was completed successfully in 2018. 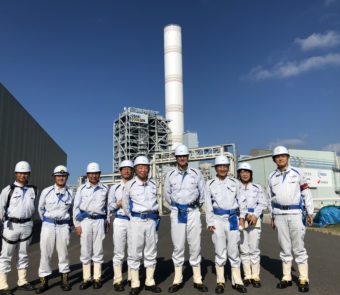 The IGCC met all efficiency and performance targets including a net efficiency of 40.8 per cent (HHV), continuous operation for 2168 hours, and cumulative operation of 5119 hours. The project has reached another significant milestone with the completion of construction of the carbon dioxide capture plant. This plant uses a physical adsorbent (Selexol Max TM) and will capture up to 400t per day of CO2 from a slipstream of the flu gas from the IGCC (17 per cent of the flu gas will be processed). It is currently being commissioned and is expected to commence operation in December.

The next stage of this demonstration is the installation of two 600kW Solid Oxide Fuel Cells to produce additional electricity from hydrogen produced by the gasifier. When installed in 2020, they are expected to increase the net efficiency of the plant by about 5 per cent. This project is on schedule and budget. It has already demonstrated the reliability and performance of the coal gasification and combined cycle power unit, and will shortly demonstrate the integration of carbon capture and fuel cell generation. These technologies are all essential to tackle climate change.