The Global CCS Institute is pleased to announce that the South African National Energy Development Institute (SANEDI) is one of the newest Institute members.  In this article, SACCCS’s Evelyn Nyandoro and Thabo Mosia introduce the South Africa’s CCS programme and initiatives.

The challenge of global warming and climate change has come into prominence in the last few decades as evidence is mounting that increasing anthropogenic greenhouse gas emissions are responsible. The current trajectory of global emissions is not sustainable and drastic action needs to be taken to achieve the climate change Paris target of significantly less than 2oC. South Africa is part of the global community that has set targets to reduce its contribution to global emissions and reduce the effects of global warming. The South African government has pledged to reduce its total CO2 emissions by 34 per cent by 2020 and 42 per cent by 2025. Several strategies have been proposed to achieve these targets, including energy efficiency, renewable energy, nuclear, cleaner mobility and carbon capture and storage (CCS) amongst others.

The South African Centre for Carbon Capture and Storage (SACCCS) is a division of the South African National Energy Development Institute (SANEDI), a state-owned entity reporting to the Department of Energy. SACCCS was formed in March 2009 in partnership with the government, South African Industry and international governments.

SACCCS has been mandated to investigate the technical feasibility of CCS in South Africa. The CCS technology has been tested and demonstrated globally and is being successfully implemented in many projects around the world. South Africa, through SACCCS, has made some progress towards the implementation of a Pilot CO2 Storage Project (PCSP) that will be a proof of concept for CCS in South Africa.

In order to guide the research into CCS in the country, a CCS Roadmap was developed and comprised of five (5) stages. The roadmap was endorsed by the Cabinet in 2012. 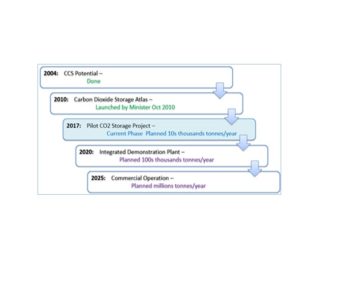 The initial study to look at the theoretical potential of CCS in South Africa was completed in 2004 by the CSIR and funded by the Department of Energy. The output of the study confirmed that there was potential for CCS.  This led to the next stage of the roadmap where the Council for Geosciences was requested to ascertain where in South Africa these storage potential areas are located. The result of this study was the Carbon Dioxide Storage Atlas for South Africa which was launched in October 2010 by the Minister of Energy. The Atlas showed that the country has 1.5 Gigatonnes of potential storage and 98 per cent of this potential is offshore. The next and current stage of the roadmap is the implementation of a Pilot CO2 Storage Project (PCSP) that is planned to store up to 50,000 tonnes of carbon dioxide (CO2) in an onshore geological formation. The pilot will be a proof of concept for CCS in the country and significant progress has been made in achieving this milestone. A project grant agreement from the World Bank has been signed by the South African government and the World Bank for the PCSP.

The final two stages of the roadmap are integrated Demonstration Plant by 2020 and commercial CCS operation by 2025. The timelines in the roadmap will need to be updated as there have been some delays regarding the PCSP. The delays have been related to the stakeholder engagement process that is currently ongoing and is bearing positive results.

The Pilot CO2 Monitoring Project (PMP) was implemented to build capacity in CO2 monitoring. One of the requirements of implementing the PCSP is that baseline monitoring would have to be done at the site identified for the project. The monitoring will be done before, during and after construction to ensure that there are no CO2 leaks from the geological formation. The project has been implemented at a natural CO2 release area in Bongwana. So far atmospheric, water and soil CO2 levels have been monitored throughout the different seasons. 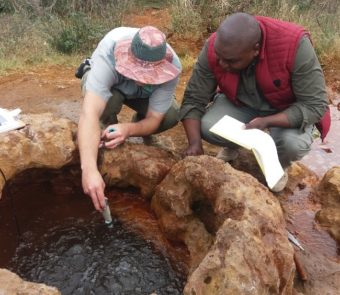 In addition to capacity building, the aim of the PMP is to come up with CO2 monitoring protocols that will be used during the implementation of the PCSP and other stages of the CCS Roadmap.

In preparation for the PCSP and other stages of the CCS Roadmap, a Carbon Capture Pilot Plant (CCPP) is being investigated – the first stage of which is a technical assessment supported by the World Bank. 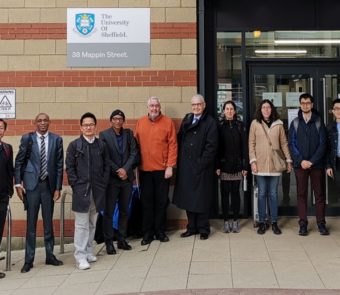 The aim of the project is to establish a post-combustion CO2 Capture Plant at a coal-fired power plant. The facility must be designed to accommodate South African conditions, ie it must have low water consumption and make use of renewable energy in order to reduce the energy penalty on the host plant. The project is in its initial stages of a prefeasibility study. The plant will be used as a capacity building facility for the country. SANEDI recently participated at an international Post-Combustion Capture Retrofit Workshop held in University of Sheffield, UK, from 9 to 12 April 2019.

In order to further support the development of CCS in South Africa, SACCCS has other research projects that look into technologies that can assist in the reduction of CO2 emissions. In 2017, SACCCS commissioned a study into carbon utilisation which identified industries in the country that can benefit from such technologies. Further research has been undertaken into carbon mineralisation and how South African industries can benefit from these technologies in terms of reducing their emissions. The future development of carbon mineralisation will be guided through a roadmap that is currently being developed by SANEDI/SACCCS in collaboration with other organisations and universities.

Other projects that SANEDI/SACCCS has undertaken include:

Although SANEDI/SACCCS is researching CO2 utilisation technologies, its current primary mandate is Carbon Capture and Storage.

The implementation of the CCS programme requires that the general public is engaged in order to develop an awareness on the technology and raise awareness on issues of climate change and the steps that are being taken to address these challenges. SANEDI/SACCCS has a Stakeholder Engagement Unit that is dedicated to this process. The process has been ongoing since the inception of the CCS Roadmap and will continue as the programme is being implemented.

The Stakeholder Engagement activities also include the hosting of biennial Carbon Capture and Storage Conferences that assist in updating stakeholders on progress being made on the projects, while also giving them an opportunity to engage with CCS experts on the benefits and challenges of the CCS technology. So far, five conferences have been hosted successfully and the next one is scheduled to be held in February 2020.

The aim of the bursary programme is to build human technical capacity in the country to enable them to participate in CCS projects when they are implemented. Since its commencement in 2010, the programme has supported 23 students to obtain post graduate qualifications with research topics relating to climate change and CCS. This has also enabled SANEDI/SACCCS to build a knowledge database on information pertaining to CCS in South Africa.

The Institute welcomes SANEDI on board and looks forward to hearing more about the CCS developments in South Africa.

The Institute has a unique and unrivalled membership including governments, global corporations, private industry and academia. We are committed to ensuring that our members are the best informed, and are most effectively able to address any issue in the CCS space. To find out more about the membership, click here.