Where is CO2 Stored and How Do We Know it Works?

Carbon capture and storage (CCS) is a proven technology suite and a vital part of reaching net-zero emissions by 2050, playing a role alongside other solutions like renewable energy, reforestation, and energy efficiency. CCS helps mitigate climate change by capturing carbon dioxide (CO2) emissions before they can reach the atmosphere or by removing historical emissions from the atmosphere.

CCS can be applied across sectors vital to our economy, including cement, steel, fertiliser, power generation, and natural gas processing, and can be used in the production of clean hydrogen.

The injection and storage of CO2 is the final stage in the CCS process and has been working safely and effectively for over 50 years. In fact, with abundant underground storage resources at our disposal, storage remains the easiest and most logical CO2 mitigation solution. There are many geological systems around the world that can retain centuries worth of CO2 captured from industrial processes or directly from the air. 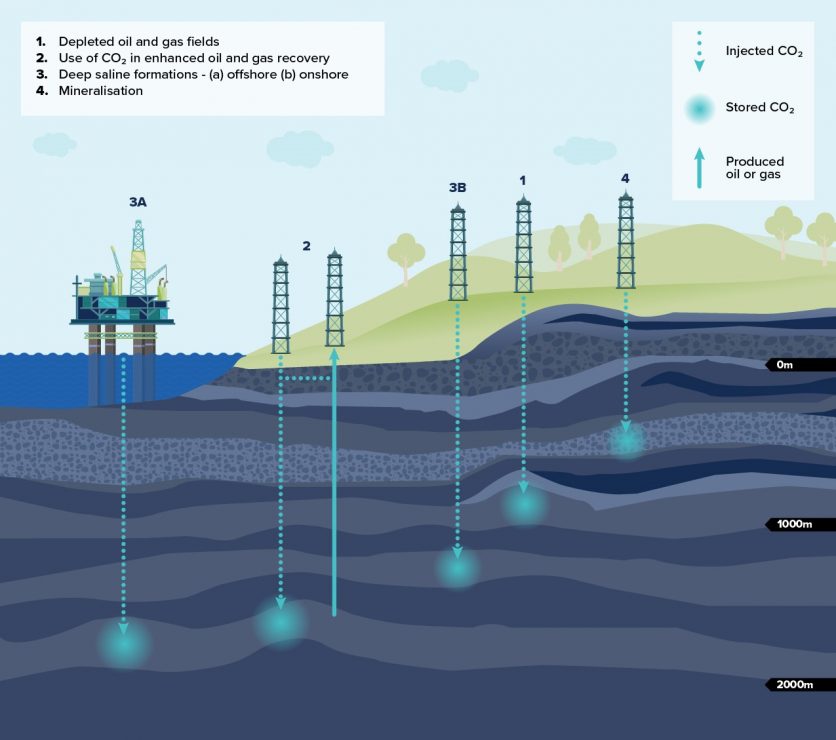 Where is CO2 Stored?

Geological storage involves injecting captured CO2 into rock formations (not caverns) – called a storage formation – typically underground at depths of more than 1 km, thereby permanently removing it from the atmosphere.

Storage formations are typically associated with the following characteristics:

Pores – millimetre-sized voids that provide the capacity to store the CO2.
Permeability – a geologic feature wherein the pores in a rock are sufficiently connected. Permeability
enables the injection of CO2 at the required rate, allowing the CO2 to move throughout the formation.
Permanence – a storage formation must include an extensive cap rock, or barrier, around the formation which helps ensure the CO2 is contained permanently.

How is CO2 Injected Underground and Why Does it Stay There?

Once captured, the CO2 is compressed into a fluid almost as dense as water and pumped down through a well into a porous storage formation. Because injected CO2 is slightly more buoyant than the salty water that exists naturally within the storage formation, a portion of the CO2 will migrate to the top of the formation and become structurally trapped beneath the impermeable cap rock that acts as a seal. In most natural systems, there are numerous barriers between the storage formation and the surface. This is the first stage of permanent storage.

Over time, a large portion of the trapped CO2 will dissolve into the saline water naturally present in the storage formation and become trapped indefinitely (called solution trapping); another portion is trapped in the pore spaces of the storage formation (referred to as residual trapping). The ultimate trapping process involves dissolved CO2 reacting with the reservoir rocks and fluids to form a new mineral. This process, called mineral trapping, effectively locks the CO2 into a solid mineral permanently.

How Do We Know it Works?

For millions of years fossil fuels (oil and gas) were trapped underground in similar geologic formations and would have remained there if humans had not extracted them. The rocks targeted to store CO2 are the same type as those currently hosting the oil and gas. More than 200 million tonnes of CO2 has been successfully injected into storage formations underground.

In Norway alone, the Sleipner and Snøhvit facilities have stored close to 26 million tonnes of CO2 since 1996. The accumulated experience of CO2 storage worldwide over several decades has proven that there are no technical barriers preventing the implementation of storage.

The world’s leading scientists and experts also agree that the storage of CO2 in geologic formations is safe. The 2005 Special Report on CCS by the Intergovernmental Panel on Climate Change concluded that “appropriately selected and managed geological reservoirs are ‘very likely’ to retain over 99% of the sequestered CO2 for longer than 100 years and ‘likely’ to retain 99% of it for longer than 1000 years”.

A variety of monitoring technologies have been successfully deployed, demonstrating our ability to measure, monitor and verify injected CO2 in the subsurface. Monitoring a CO2 storage site occurs over its entire lifecycle from pre-injection to operation to post-injection. Operational and research experience over several decades demonstrates that injected CO2 can be monitored to confirm its containment.

In the unlikely event of a CO2 leak, there are decades of experience to detect and then remediate a CO2 leak. Techniques and technologies adopted from the oil and gas industry include emergency shutdown procedures and well re-completion and recementing. To date, there has been no significant leak of CO2 from a CCS operation.

How Much CO2 Can Be Stored Underground?

Importantly, storage resources are found in almost every nation in the world, enabling the global deployment of CCS. Like any natural resource, some countries have abundant storage resources while others have limited potential. For example, there is high confidence that storage formations in North America host at least 2,000 gigatonnes of storage resources alone.