What is CCS and how is CO2 captured?

“Carbon Capture and Storage” or “CCS” is a term that refers to technologies that capture the greenhouse gas carbon dioxide (CO2) and store it safely underground, so that it does not contribute to climate change. CCS includes both capturing CO2 from large emission sources (referred to as point-source capture) and also directly from the atmosphere.

The first step in CCS is capturing the CO2, which can be done through several different methods, all of which are well established and effective.

Why is CO2 Capture Necessary?

Industrial processes such as cement, steel, pulp and paper, chemicals and natural gas processing are significant emitters of CO2, accounting for around 25% of global energy-related CO2 emissions. CCS can be applied in these industries to make a significant reduction in global CO2 emissions. In some cases, CO2 emissions are a by-product of these processes rather than the result of burning fossil fuels in the production process. For some industrial processes (such as cement manufacturing and blast furnace steel making) CCS is the only technological option that can help secure deep emissions reductions now. 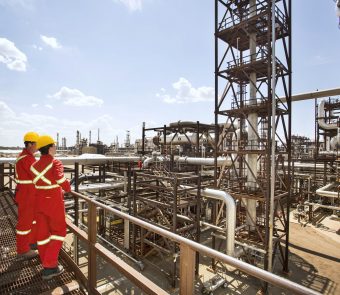 Some of the first CCS facilities are in natural gas processing, as well as fertiliser, ethanol, chemical and hydrogen production. For example, the Sleipner CO2 Storage project in Norway, operating since 1996, captures around one million tonnes of CO2 a year. This is then injected into a deep saline formation under the North Sea for permanent storage. In the last decade, applications of CCS have broadened and now include coal-fired power generation, ironmaking, clean hydrogen production and direct air capture and storage. The first commercial CCS applications in cement production, gas power generation and waste-to-energy are under development.

Where Does Carbon Capture Technology Go From Here?

As new projects are announced and developed, the range in the scale of facilities is becoming broader and individual capture plants are getting larger. At the same time, CCS networks are making smaller capture plants economically viable. Modular plants enable more economic deployment of carbon capture at these smaller plants. As capture technologies develop through deployment, capture technology efficiencies are expected to improve. Capture rates over 95% are both possible and feasible.

How is CO2 Captured?

In CCS from point sources, CO2 is captured before it reaches the atmosphere in industries such as cement and steel production, hydrogen production from fossil fuels, incineration of waste, and power generation. Most sources of CO2 from human activity are impure; mixed with nitrogen, water and other gases. Capture is the purification of CO2 so that it can be economically stored. CO2 can be captured from point sources efficiently with a capture level of over 90% using a range of different engineering approaches.

There are four basic types of CO2 capture: precombustion, post-combustion and oxyfuel with postcombustion, and inherent capture. 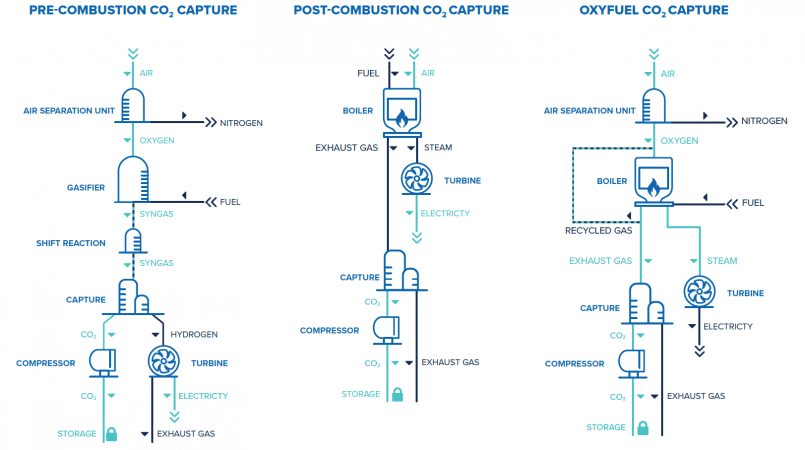 Pre-combustion processes convert fuel into a gaseous mixture of hydrogen and CO2. The hydrogen is separated and can be burnt without producing any CO2; the CO2 can then be compressed for transport and storage.

Post-combustion processes separate CO2 from combustion exhaust gases. CO2 can be captured using a liquid solvent or other separation methods. In an absorption-based approach, once absorbed by the solvent, the CO2 is released by heating to form a high purity CO2 stream. This technology is widely used to capture CO2 for use in the food and beverage industry.

Oxyfuel combustion processes use oxygen rather than air for combustion of fuel. This produces exhaust gas that is mainly water vapour and CO2 that can be easily separated to produce a high purity CO2 stream.

Inherent capture processes incorporate the capture of CO2 into the inherent design of the process, never allowing produced CO2 to be contaminated with other gases, keeping it in a high purity state.