What is Carbon Capture and Storage and How Does it Work?

“Carbon Capture and Storage” or “CCS” is a term that refers to technologies that capture the greenhouse gas carbon dioxide (CO2) and store it safely underground, so that it does not contribute to climate change. CCS includes both capturing CO2 from large emission sources (referred to as point-source capture) and also directly from the atmosphere.

Point-source capture is when a large emission source, like an industrial facility, is equipped with technology allowing the capture and diversion to storage of CO2, preventing it from being emitted. It is also possible to remove historical CO2 emissions, those that are already in the atmosphere, through direct air capture and storage (DACCS) or bioenergy with capture and storage (BECCS).

CCS can be applied across sectors vital to our economy, including cement, steel, fertilisers, power generation and natural gas processing, and can be used in the production of clean hydrogen. 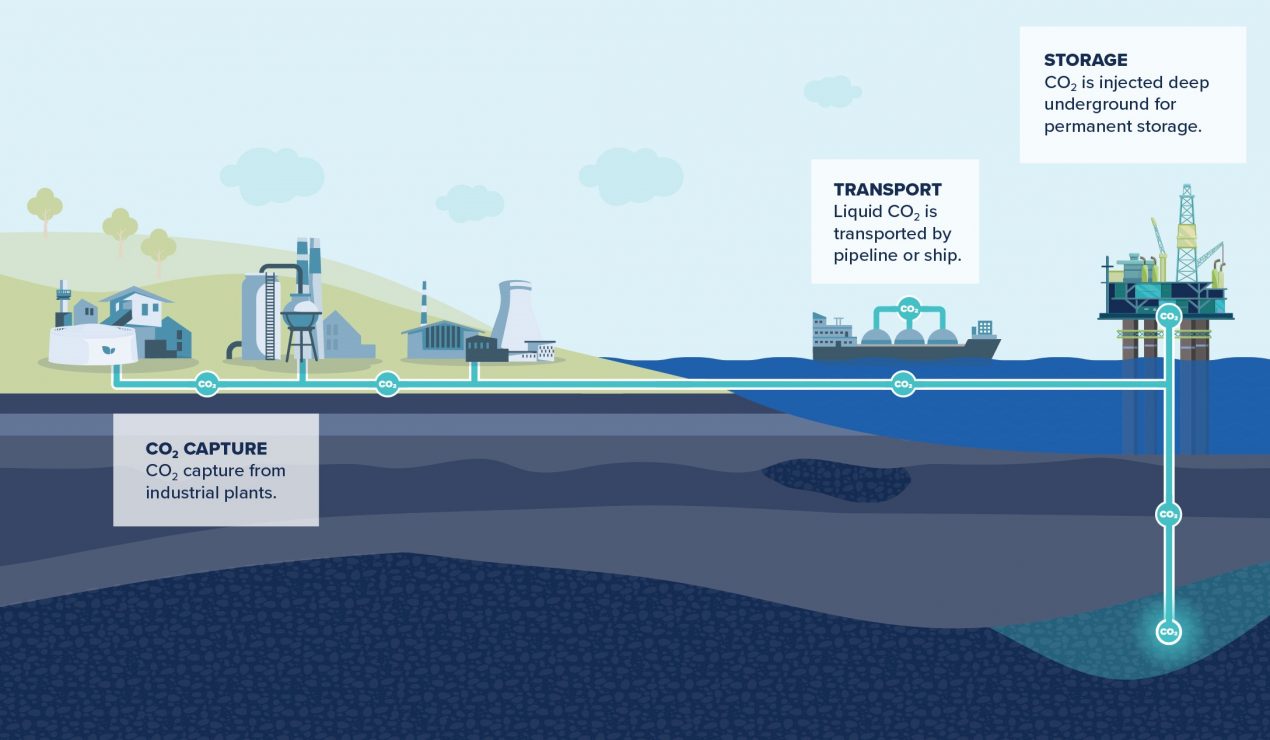 How Does it Work?

During capture, CO2 is separated from other gases produced at large industrial facilities, such as steel mills, cement plants, petrochemical facilities, coal, and gas power plants, or from the atmosphere. There are several capture methods in use – all are proven and effective, with different methods applied based on the emissions source.

Once separated, the CO2 is compressed for transportation. This means increasing pressure so that the CO2 behaves like a liquid. The compressed CO2 is then dehydrated before being sent to the transport system. Pipelines are the most common mode of transport for large quantities of CO2. For some regions of the world, CO2 transport by ship is an alternative.

Following transport, the CO2 is injected into deep underground rock formations, often at depths of one kilometre or more, where it is safely and permanently stored. These rock formations are similar to what has held oil and gas underground for millions of years. Close to 300 million tonnes of CO2 has already been safely and successfully injected underground. Fortunately, there is an abundance of storage available around the world.

Why is CCS Necessary?

Climate change is the most urgent challenge facing humanity today, and the science is clear that we must use every tool at our disposal if we wish to avoid the worst of its impacts. The world’s leading climate and energy bodies – the United Nations’ Intergovernmental Panel on Climate Change (IPCC) and the International Energy Agency (IEA) – have both outlined a clear and important role for CCS in reaching net-zero emissions by 2050. Moreover, experts agree that CCS will be particularly vital for hard-to-abate sectors like cement and steel production, where no other viable solutions currently exist, and for removing CO2 already in the atmosphere. Simply put, we are running out of time to reduce our global emissions and it is becoming increasingly clear that any realistic path forward on climate action will include CCS.

CCS is already happening around the world. There are currently 29 operating facilities with a cumulative capture capacity of nearly 40 million tonnes per annum, the equivalent of taking nearly 8 million cars off the road. There are now over 100 facilities across all stages of development and across a range of sectors, but much more needs to be done.