Home > Insights > A new climate agreement and the role of INDCs

A new climate agreement and the role of INDCs

Negotiators for Parties to the United Nations Framework Convention on Climate Change (UNFCCC) are meeting in Bonn, Germany June 1-11 2015 to discuss business for the three Subsidiary Bodies ahead of the 21st Conference of the Parties meeting in Paris in December. The Global CCS Institute is attending the Bonn meeting as an accredited observer to the UNFCCC process. The Institute will provide updates from the conference on proceedings relevant to carbon capture and storage (CCS). In this Insight the Institute's Mark Bonner, Principal Manager - International Climate Change discusses the importance of Intended Nationally Determined Contributions (INDCs) and how they will be used in negotiations and any resultant agreement. Other Insights in this series cover the progress from the first week of Bonn, UNFCCC technology and finance mechanisms, and the possible treatment of technology in any agreement to come from Paris. 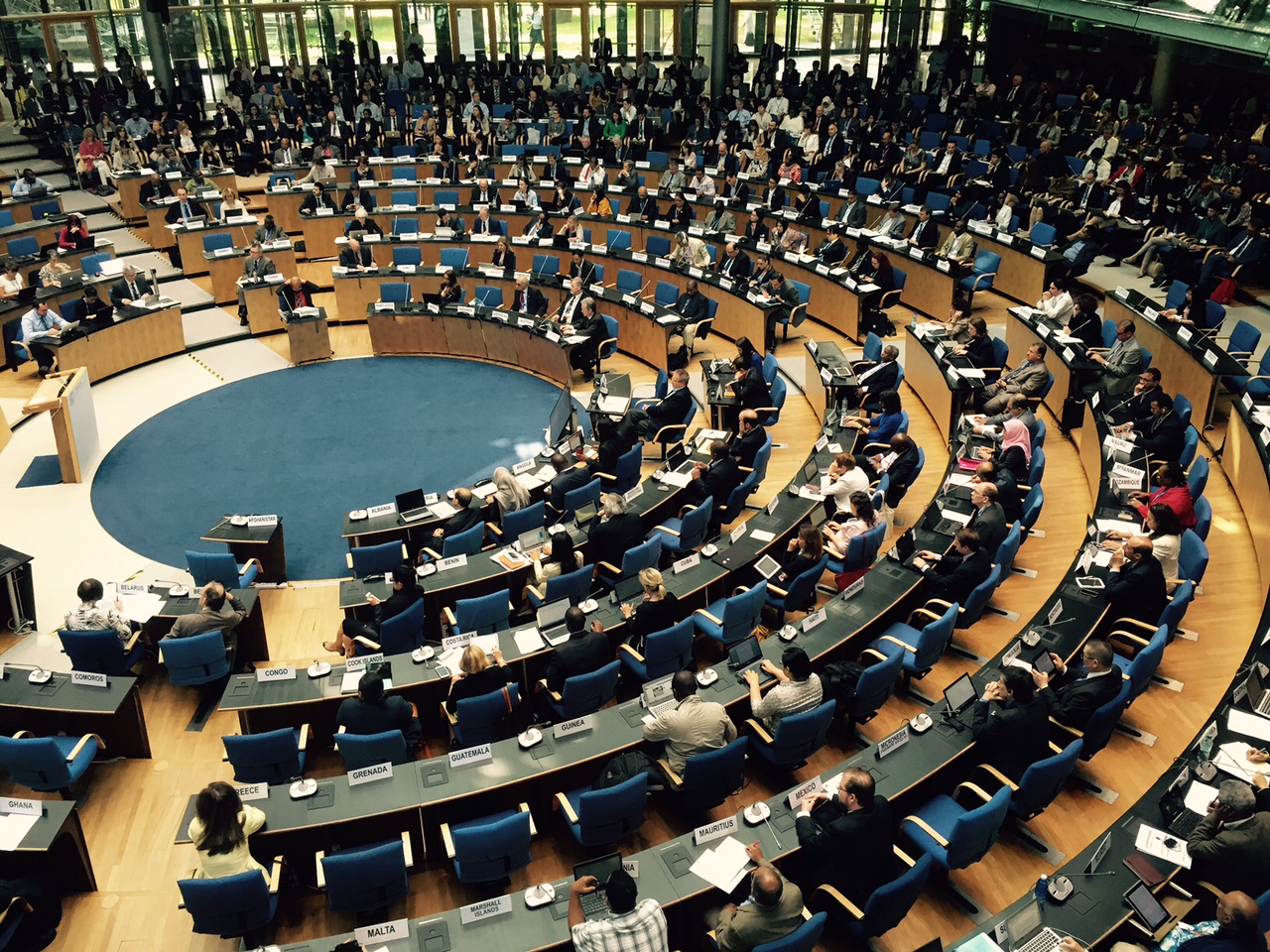 In 2011, nearly 200 countries agreed to create a new climate Agreement. This decision took place at the annual climate change negotiations at the 17th Session of the Conference of Parties (COP17) in Durban. Any future Agreement will be considered ‘new’ in the sense that it will fundamentally shift the onus of climate related action to all countries, developed and developing alike. Any future Agreement however remains bound by the many intractable legacy provisions inscribed in the Convention and the Kyoto Protocol. Negotiations are proceeding on the basis that much of the UNFCCC architecture (principals, mechanisms and institutions) established over the past 20 years will need to be preserved and/or enhanced. These include the principle of ‘common but differentiated responsibilities’ (CBDR) which differentiates national efforts and introduces concepts of equity of actions; as well as sustainable development as cited in the Clean Development Mechanism’s (CDM) objective.

Redefining the scope of influence

A number of paradigm changes seem to be emerging in these negotiations:

Firstly, unlike the 1997 Kyoto Protocol where the legal nature of the instrument was fairly well defined by this time of negotiations and mitigation commitments fiercely negotiated; the opposite seems true today.  Fourteen negotiating days out from its supposed adoption, the legal form of the new Agreement is being fiercely contested and remains largely undefined. Yet the associated mitigation ambitions as contained in Intended Nationally Determined Contributions (INDC) seem to be largely uncontested in the formal process (outside of the multilateral assessment process).

Secondly, there seems to be a growing acceptance by negotiators for a need to challenge the historical boundaries of international cooperation. There is an increasing emphasis on developing-developing country partnerships (south-south cooperation) within the technology and adaptation agendas, alongside more conventional developed‑developing country actions (north-south) in the mitigation and finance agendas.

Thirdly, there is an awakening amongst negotiating Parties that the scope of mitigation ambition and scale of climate change remedies lie beyond the reach of the public sector. As such, it is evident that within this government-led negotiating process, serious extension and prioritisation is being considered as to how to formally elevate the role of the private sector - which is now referred to as a ‘non-state actor’ - into the future.

What is the role of an INDC?

A formal decision was adopted by countries in 2013 at COP19 (Warsaw) to “initiate or intensify domestic preparations” of intended nationally determined contributions (INDC). These communication documents are basically intended to characterise a country’s national climate ambition over the short to medium term within the context of the Conventions overarching objective of stabilizing greenhouse gas emissions. This latter objective was further quantified in 2011 at COP16 in Cancun where countries agreed to give effect to stemming average temperature rises to no more than 2 degrees Celsius (2°C) on pre-industrial levels.

How will INDCs impact the Paris Agreement?

It is important to note that INDCs do not as yet represent internationally legally binding commitments by countries, and indeed are offered on the basis of the legal caveat: ‘without prejudice to the legal nature of the contributions in the context of any new Agreement’. Similar to the pledges made in 2009 under the so-called Copenhagen Accord (COP15), emissions reduction ambitions in INDCs are often couched with unconditional and conditional terms. Conditional ambitions are typically contingent on an understanding of the broader mitigation efforts of other countries.

Will INDCs be formalised into legally binding commitments?

It is yet to be revealed how the ambitions described in the INDCs, which inevitably differs between countries in both form (absolute and relative emissions reductions) and scope (baselines, deadlines), get carried over to legally binding obligations in the new Agreement. While the role of INDCs themselves might be formally acknowledged within the new Agreement, the legally binding commitments will likely form an Annex to the new Agreement (as is the case for the Kyoto Protocol’s quantified emission limitation and reduction objectives). Indeed, there is as yet no formal follow-up to the initial INDC process and so there will need to be a decision on how to revise and renew such ambitions over time.

To date, only eleven INDCs have been received by the UNFCCC. These include:

What is the sufficiency of INDCs?

While the EC has submitted an INDC on behalf of the European Union's (EU) 28 member states, to be delivered cooperatively, there is no breakdown of national allocations. It is too early to be precise about what the impact of INDCs will be in achieving the 2°C target. However many observers are already commenting that they expect they will fall far short of the required level of mitigation required. It is worth remembering that the United States and EU regions alone contribute to just under a third of global emissions. We should get a better indication after Japan, India and China submit their INDCs  - which are imminently expected at the time of writing this Insight. How such an outcome, whatever it may be, will impact on the constructiveness of negotiations in Paris is also yet to be seen.

The following table illustrates the nature of the INDCs submitted to date. Of interest is that two INDCs have specifically referred to the important role CCS must play in meeting their contributions (Canada and Norway) and the apparent preference for domestic abatement outcomes over acquiring potentially lower cost international offsets (ie allowances to emit).

INDC as published on UNFCCC portal 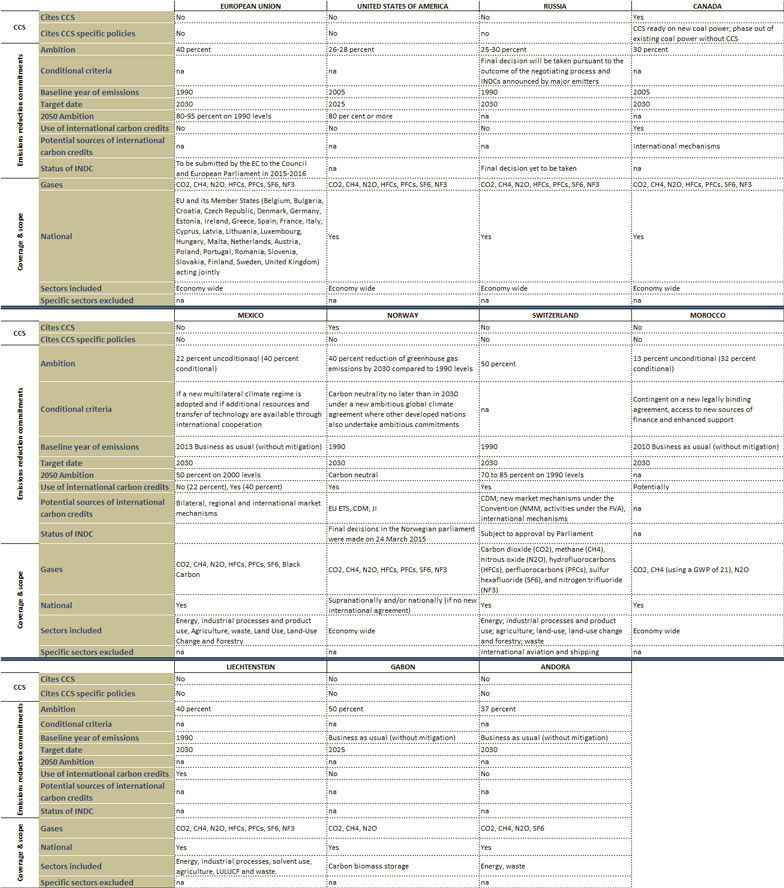