Home > Insights > Are the legacy wells in the Gippsland Basin an issue for CO2 storage?

Are the legacy wells in the Gippsland Basin an issue for CO2 storage?

The CarbonNet project is investigating the potential of geological formations in the Gippsland Basin off south eastern Australia to store significant volumes of carbon dioxide (CO2), which could form the basis of a multi–user carbon capture and storage (CCS) network. To date, the Global CCS Institute has published four reports from CarbonNet: a summary and historical background, developing a commercial framework for a CCS hub network, geological characterisation of three potential sites for the project and the site selection and certification process. This Insight reports on the most recent study by the CarbonNet Project titled Integrity of Wells in the Near-shore Area Gippsland Basin Victoria. This information will feed into site development and future potential risk management plans.

Carbon capture and storage (CCS) has the potential to reduce CO2 emissions from large–scale industrial facilities and make an important contribution to efforts to combat climate change. The technologies behind CCS are proven and have been business as usual operations for the oil and gas industry for decades.

The geology that results in the accumulation of oil and gas in underground reservoirs is often the same geology targeted to store CO2 for CCS. This means that storage reservoirs and seals can be intersected by wells that were previously drilled while searching for oil and gas. These old petroleum wells, known as legacy wells, may potentially provide a leakage path out of a CO2 storage complex, the likelihood of such an event is extremely low. For example, in the Weyburn CO2–enhanced oil recovery (CO2–EOR) project there are thousands of pre-existing wells, including active petroleum wells, CO2 and water injecting wells, as well as abandoned wells which all need to be accounted for and their quality assessed. Despite the presence of many wells, a comprehensive environmental monitoring campaign at Weyburn has not detected any evidence of leakage in more than fifteen years of operation.

Leaks are rare because petroleum drilling and well completion requirements are the subject of strict regulatory, industry and operator standards and practices (see Figure 1 below). By correctly completing a petroleum well, the overall probability of well leakage is low. Despite the low probability of leakage, a comprehensive assessment of the existing wells, how they are completed and their chance of leakage is required pre-injection for any project, including the CarbonNet Project. 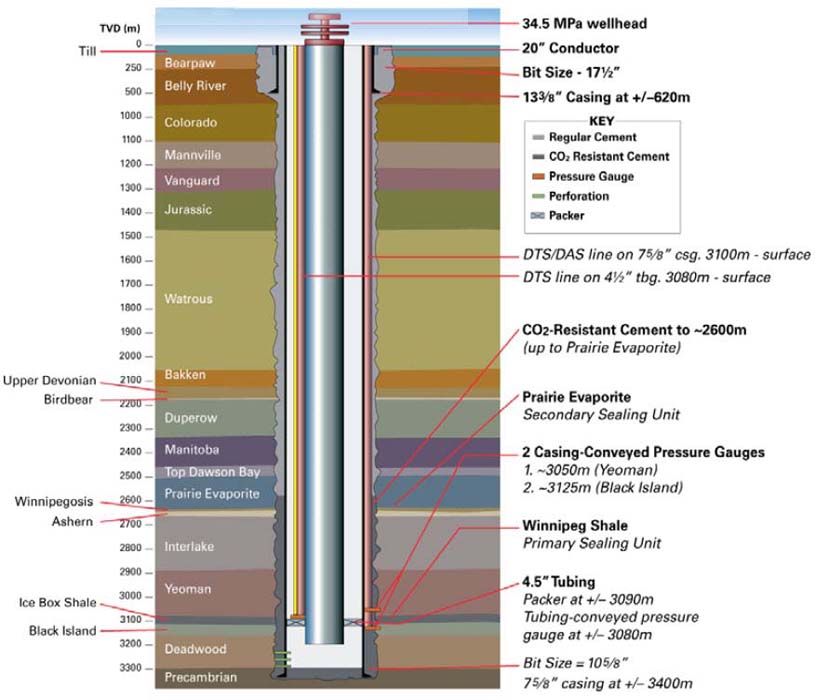 The example here represents a dedicated and research-orientated CO2 injection well for a dedicated CO2 injection site. The completion of each well is slightly different, and depends on the well's final purpose and geology; whether to just drill and explore the subsurface, or to actually inject or to produce a fluid. Ideally, a completed well will be lined with steel casing including cement between the casing and rock. Where there is potential that fluids could move between different geological layers a plug is used to isolate the layers. Source: Aquistore: CO2 storage at the world’s first integrated CCS project. Project summary report

The Gippsland Basin is one of Australia's main oil and gas producing basins, located in coastal Victoria. It began producing hydrocarbons in the 1960s, and more than 1,500 exploration and development wells have been drilled since. Through the regulatory authority, Geoscience Australia has a database of these Gippsland wells (and almost all wells in Australia) and how the wells were drilled, engineered and abandoned which is available to any technical expert to review. In the nearshore Gippsland Basin (the area of interest for the CarbonNet Project), 49 wells have been identified but only fourteen wells are in the general proximity of the storage sites CarbonNet is investigating (see below). These fourteen wells are the focus of this report. The wells were drilled between 1965 and 2008, reaching depths of between 1,280 meters (m) to 2,905m below sea level. 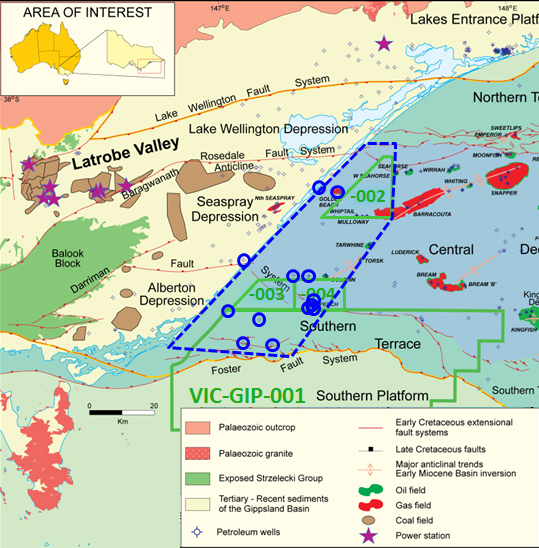 "none of the fourteen wells analysed, present any significant risk of leakage through the Lakes Entrance Formation, demonstrating that the regulatory intention of aquifer and resource protection is being achieved, and that there is negligible risk of CO2 rising to near-surface levels where it might present a risk to the environment"

To assess the probability of leakage CarbonNet followed a step-by-step process of identification, review and assessment. Firstly, CarbonNet identified where the wells intersected the potential CO2 storage reservoirs and the seals in the nearshore region. If the well did drill through the reservoirs and/or seals, the team then reviewed if the wells had cemented casing across the seals and/or cement plugs. These two well enhancements are standard practice and ensure that the seal (especially the uppermost regional seal) will act as a barrier and prevent leakage up the well. A standard risk assessment matrix of likelihood and consequence was carried out for all fourteen wells. This process took into account the probability of the CO2 plume approaching or impacting the well to judge if there was potential for surface leakage or public/environmental risk.

The probability of potential leakage for all wells in this areas was judged to be very low or low for the uppermost main regional seal (Figure 3). All wells (apart from the wells still producing fluids) were cemented in or at the base of the seal, ensuring a secure seal with no avenue for leakage. For the lower intraformational seals on the other hand, specifically the T2 seal, the conclusion was not so clear for all wells due to a lack of information on the well completion data. The investigation of the lower intraformational seals of all wells found that five of the fourteen presented a low probability of leakage and two are still producing (and therefore not sealed). The remaining seven wells were already scheduled to be avoided at T2 level due to limited storage potential and/or thin T2 sequence, and the well integrity results confirmed this decision.

Figure 3: The 14 wells of the CarbonNet Project and their well completion details.

Reservoirs are in yellow, T2 is the lower seal (solid grey) and Lakes Entrance (green) is the regional seal. Image courtesy of the CarbonNet Project.

Despite an overall low probability of well leakage, the investigation confirmed that areas of thin T2 seal where petroleum operators could not put in cement plugs due to a thin seal, should be avoided for intraformational storage. This precautionary approach of eliminating potential well leakage scenarios is required for these offshore wells because offshore wells are often harder to access and remediate then onshore wells. By avoiding these areas that may have required well remediation early in the site characterisation phase, CarbonNet has reduced the overall uncertainty to the project and avoided potential issues that could have arisen further along the project's development.

The opportunity to avoid potential leakage scenarios was only achievable because CarbonNet is using a 'play' based approach during their site characterisation studies, which was previously discussed here. A play based approach, where numerous sites are identified, evaluated and grouped based on similar geological characteristics, enabled the Project to readily upgrade and downgrade particular site storage concepts based on this new well integrity study. Only some of the sites with potential to be valid storage prospects were downgraded, but it did not impact the entire project's feasibility, which could have been the case if a single option were pursued.

Existing petroleum wells are a potential risk to the feasibility of a storage site, but through site characterisation and using a risk management plan, the risks can be managed. Ultimately, existing standards, best practices and regulatory management enforced by the petroleum industry and governments means the risk around well leakage is low.