Negotiators for Parties to the United Nations Framework Convention on Climate Change (UNFCCC) are meeting in Bonn, Germany June 1-11 2015 to discuss business for the three Subsidiary Bodies ahead of the 21st Conference of the Parties meeting in Paris in December. The Global CCS Institute is attending the Bonn meeting as an accredited observer to the UNFCCC process. In this first of a series of Insights from the conference, the Institute's Mark Bonner, Principal Manager - International Climate Change provides his observations on the progress during the first week. Other Insights in this series cover the UNFCCC technology and finance mechanisms, possible treatment of technology in an agreement from Paris, and the role of INDCs in Paris. 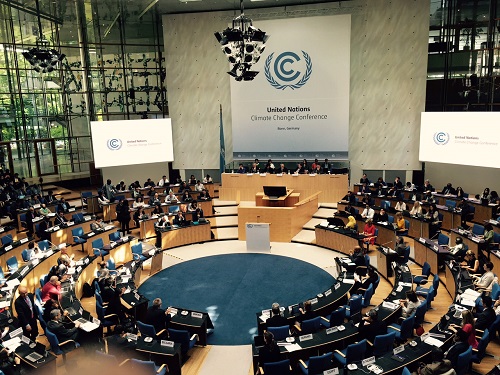 Negotiators gather in Bonn to discuss business for the three Subsidiary Bodies of the UNFCCC. Picture - Global CCS Institute

The three subsidiary bodies of the UNFCCC have convened and will spend the next two weeks in Bonn, Germany to negotiate a mixture of conventional and extraordinary issues under the climate treaty. This Insight provides a summary of what has taken place so far in relation to carbon capture and storage (CCS).

The Subsidiary Bodies for Scientific and Technological Advice (SBSTA) and Implementation (SBI) are progressing important technical and operational issues of the Convention and the Kyoto Protocol.

Carbon markets under the SBSTA agenda is perhaps of most interest to the CCS community. This agenda includes three tracks:

These agendas have effectively been put on hold within the UNFCCC’s negotiations until the Paris Agreement reveals how they are to be treated in the post 2020 and pre 2020 periods. This means that progress on the role of carbon markets in the pre 2020 period (outside that of the existing Flexibility Mechanisms of the Kyoto Protocol) is essentially held hostage to the Paris Agreement negotiations; as is the future role (if any) of the Clean Development Mechanism (CDM) in the post-2020 period.

All eyes on the Paris Agreement

The extraordinary business of these talks is clearly the Paris Agreement (new climate instrument) negotiations under the Ad-hoc Working Group on the Durban platform for Enhanced Action (ADP). A sobering thought is that further refinement of this climate instrument has only 16 negotiating days afforded to it before COP21 commences in Paris.

Fortunately, the chances of an Agreement failing in Paris appear slim, but the extent to which negotiations will be further empowered by the efforts of negotiators in Bonn to streamline the so-called “Geneva Negotiating Text”(pdf) (UNFCCC Document - FCCC/ADP/2015/1) is speculative at best.

A worst case scenario however is that no new Agreement is secured in Paris. The French COP21 President-designate, Mr. Laurent Fabius observed in his opening remarks on Monday, 1 June that “..this would be a terrible thing and could strike a fatal blow to future negotiations”.

Technology is one of six elements adopted at COP17 (Durban) contained in the Geneva Text (the other elements being: mitigation, adaptation, finance, capacity building, transparency of action and support). Although “technology transfer and development” (TTD) is referenced extensively throughout the Geneva Text, it formally occupies Section G (pages 51 to 56; paragraphs 129 to 134).

The Technology Mechanism has already been established and implemented under the Convention, so there is a possibility that the Agreement may yet remain silent on technology-related commitments. In addition to this, concepts and issues related to TTD are still to be settled in Section G, including:

What can be achieved in Bonn?

As outlined in the ADP Scenario Paper (pdf), the 90 page Geneva Text adopted by Parties in March formally remains on the negotiating table until the adoption in Paris of the final outcome. This is to reassure all Parties that no negotiating issue will be excised from the Paris agenda regardless of the outcomes of this Bonn meeting. The main ambition of this meeting however is to construct a more lucid negotiating document than the unwieldy Geneva Text; while such an output is referred to in negotiating parlance as a “non” paper (ie no legal standing), the ultimate intent is clearly for Parties to regard the document as having a very high potential to be adopted as the basis of negotiations in Paris.

What has Bonn delivered in its first four days?

On Monday, 1 June the ADP co-Chair’s tasked a number of facilitators under their direct authority to ‘faithfully’ give effect to Party discussions on the consolidation of the Geneva Text. At the ADP Chair’s Stocktake held on Thursday, 4 June the co-chairs described the current effort as having “spent 30% of allocated time for a 5% reduction in the size of the document”.

Clearly, most Parties consider progress too slow, but many positively endorsed the Chair’s order of business and applauded the positive and collegiate manner in which it has been conducted so far. Such sincere behaviour by the Parties bodes well for future ADP meetings (ADP-3 and ADP-4) scheduled for September (five days) and October (five days) respectively.

One indication of the expected progress to be made by the end of this first week (Saturday, 6 June) was offered by the Indian delegation who observed that it expected the current 90 page Geneva Text to be about 30 pages lighter through the removal of duplicative and repetitive sections, paragraphs, sentences, concepts and options.

Other CCS highlights of the Bonn meeting so far?

There have been perhaps two other CCS-related events of note.

Particularly striking from the presentation was the apparent opportunity for CCS retrofits, especially to existing coal fired plants in China; and the very high propensity for increased and non-linear rates of diffusion as costs reduce over time.

The Institute's Mark Bonner, Principal Manager – International Climate Change (mark.bonner@globalccsinstitute.com) and John Scowcroft, EMEA Executive Adviser (john.scowcroft@globalccsinstitute.com) are attending the Bonn meeting and would be more than happy to meet and/or discuss any related issues. A further update on the Bonn climate talks will be provided on 9 June.