Carbon capture and storage in de-carbonising the Chinese economy

CCS in China – low-key deployment with facilities of global significance

China has a broad portfolio of activities focused on CCS through directives and incentives issued by various levels of government. Policies tend to be focused on supporting individual projects/facilities, which are not always well publicised, and most often come to light through direct engagements with their proponents. Like an iceberg, the visible effort tends to be only a part of ongoing CCS-related activities across China.

While North America hosts more operational CCS facilities than China, especially at large-scale, this masks significant progress over the past decade in the development and deployment of CCS in China.

Notables examples of CCS facility developments in China include:

A significant development occurred in March 2017, when the Yanchang Integrated Carbon Capture and Storage facility was launched into construction. This is the first large-scale CCS facility to move into construction in China as well as in Asia.

In December 2017, Sinopec Qilu Petrochemical CCS facility followed as the second when Sinopec commenced retrofitting a 400,000 tonne per annum CO2 capture facility to a fertiliser plant.

Details of the Yanchang and Sinopec Qilu CCS facilities, together with a fuller listing of CCS facilities in China at various scales and stages of development, is shown graphically in Figure 1 and a tabular form in Table 1 (data sourced from Global CCS Institute Facilities Database; CO2RE). 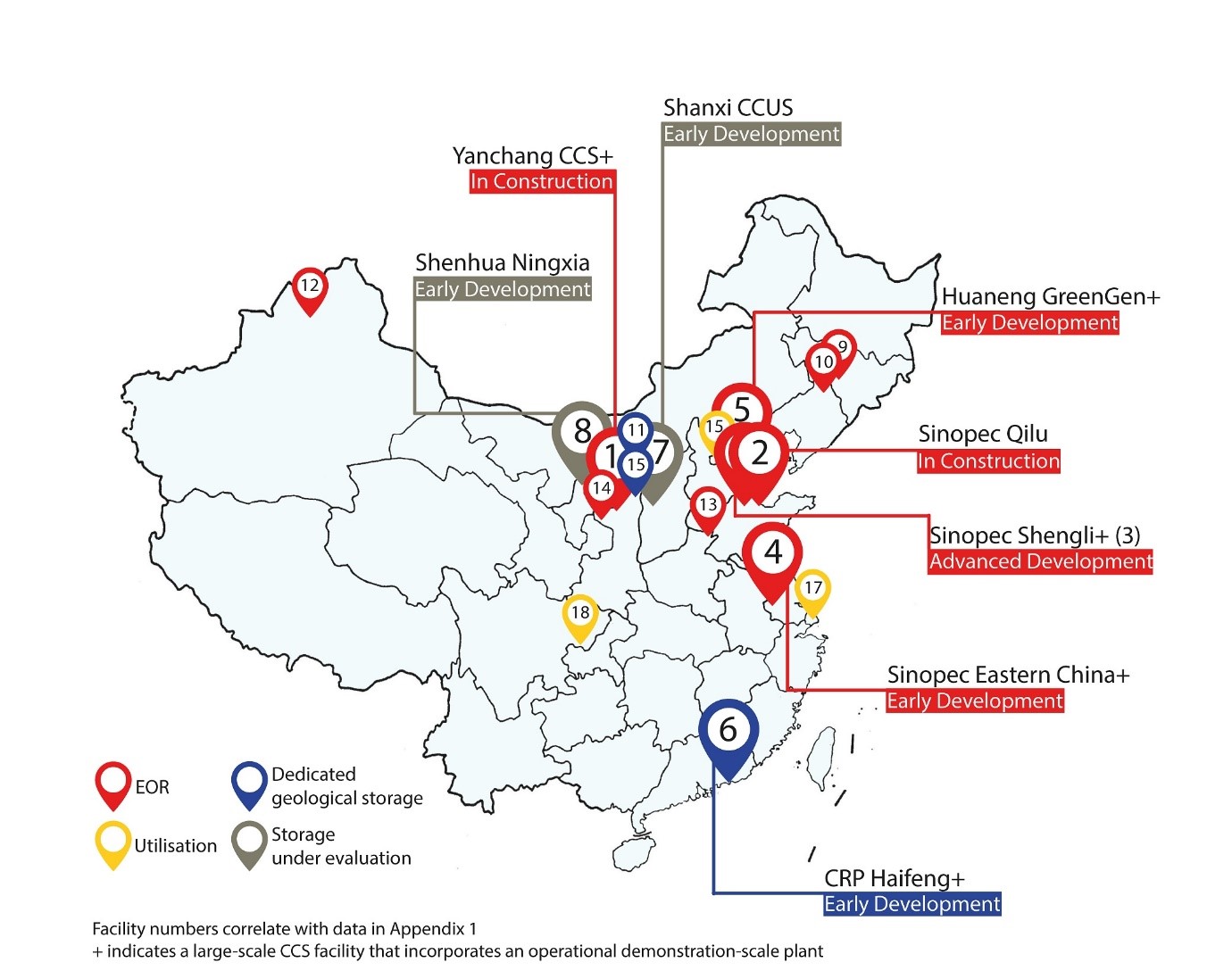 Accelerating CCS in China – incentives and regulation are at the forefront

At present, operational CCS capacity in China is no more than 2 million tonnes per annum of CO2 capture. This needs to increase by many magnitudes over the next fifteen years.  The Paris Agreement has refocused attention on emissions reduction and CCS is becoming a more prominent part of that conversation in China.

Carbon capture and storage is proven in use at various scales and across a range of industries in China, highlighting its versatility.  The challenge for CCS deployment is not technology.

As in the rest of the world, for CCS to be widely deployed in China, a supportive business case must be made. At its heart, this involves three intertwined factors: the setting of national emission reduction targets consistent with the aims of the Paris Agreement, the inclusion of CCS in national climate Actions Plans, and the establishment of policies that reward emission abatement through CCS.

There is no CCS without the ‘S’ and development of CO2 storage resources outside EOR in China must be prioritised; not to do so raises the risk of CCS deployment being slowed by lack of data on storage resources. An important component of storage ‘availability’ in China is progressing the establishment of CCS-specific legal and regulatory regimes that will support the many hundreds of facilities (indeed thousands) that will emerge over the course of the next few decades