Carbon storage in the Baltic – new insights from the Bastor2 study

This Insight, written by one of the study's authors, Per Arne Nilsson, is adapted from the Executive Summary to the Final Summary Report from the Elforsk Bastor2 study. The five part report series was undertaken with support from the Global CCS Institute. The Bastor2 study has identified some estimated 16 gigatonnes (Gt) of carbon dioxide (CO2) storage capacity in the Baltic Sea region along with assessments of environmental, social, legal and logistical conditions. This Insight introduces the focus of each Work Programme (WP) along with their major findings. Final reports from all Work Programmes will be published on the Global CCS Institute website during April 2015.

The Baltic Sea CO2 Storage (Bastor2) project conducted by Elforsk ran from June 2012 to September 2014, with a vision of developing a joint transport and storage infrastructure in the Baltic Sea region. The project’s stated objective has therefore been to investigate the potential for geological storage in the region and the necessary conditions for its development. The principal task was to make thorough geological assessments, given the available geological information currently. Four additional work packages were organised in support of the broader project objective, WP2 - Knowledge about Environmental Impact, WP3 - Social Aspects (communication and acceptance), WP4 - Legal and Fiscal Aspects and WP5 - Infrastructure and Logistics. Editions WP4 and WP5 will be published later this month.

The geological assessment is based on prior research within the Finnish Carbon Capture and Storage Program (CCSP) and provides input for further studies. To begin with, the available set of geological information was deemed insufficient, so agreements were made to procure additional data from Latvia, Russia and Poland. These initiatives were successful and new data was made available, to a large extent helping to enhance the confidence in the geological predictions from the project. A positive outcome is that channels have now been opened for expanded geological cooperation in the Baltic Sea region.

The key results from each work package are presented in this Insight. However, given the complexity of the research, these are only highlights, for which reason the interested reader is kindly advised to consult the respective chapters of the Geological Assessment report and/or the respective work package reports which will continue to be published on the Global CCS Institute site throughout April 2015.

The Geological Assessment report, also known as Work Package 1 (WP1) serves as the first in a series of work packages for the Bastor2 project. This study concludes that there is a theoretical regional capacity to store some 16 gigatonnes (Gt) of CO2 in the sandstone formations under the South Eastern parts of the Baltic Sea. “Theoretical” capacity is the lowest level of confidence in site characterisation model used to describe storage opportunities. The project recommends a number of additional measures to be taken to increase confidence in the geological characterisation. 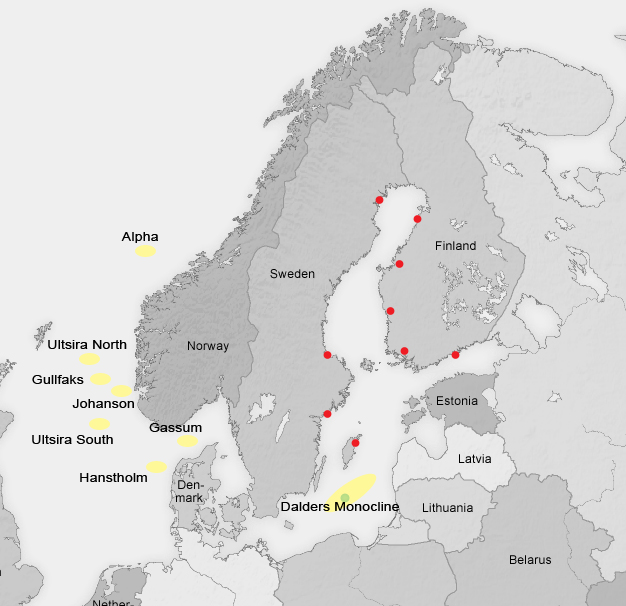 The southern Swedish sector has relatively poor permeability and porosity characteristics. The dynamic modelling suggests that with five injection wells, a total injection capacity of 2.5 megatonnes (Mt) per year could be achieved. There may be reservoir intervals with better properties where higher injection rates could be safely achieved. Thus it is possible that this area could be suitable as a storage site for CO2 captured from a limited number of industrial facilities. Other areas to the north east in the Dalders Monocline may have better qualities and allow a higher rate of injection. Therefore new well data covering this area, in particular offshore Latvia would help to identify more suitable sites. Also areas onshore and offshore Kaliningrad would appear to have better reservoir qualities.

The risk associated with seal failures is considered low, however the sealing integrity will require further investigation once new data becomes available and an injection site is selected.

The recommendations for further work include:

On the basis of the recommendations above, additional efforts to increase Baltic Sea regional cooperation should be undertaken to ensure that an effective strategy for CO2 storage is developed.

Work Package 2 (WP2); the Knowledge about Environmental Impact report finds there is high generic knowledge about the Baltic Sea ecological and environmental conditions. For industrial projects the respective Nordstream and Oljeprospektering AB (OPAB) Environmental Impact Assessments (EIA) have provided additional and valuable information. For a carbon capture and storage (CCS) pilot project with exploration drilling and test injection of CO2, comprehensive and site specific investigations are required. The delivered catalogue of current knowledge will be of use when an EIA team is planning the work and content, especially the identified knowledge gaps related to CO2 injection activities and site development. The project has produced an outline work plan for a future EIA including a preliminary budget. Mandatory items are pinpointed in the plan, along with a number of recommended topics. The tentative work plan, proposed EIA content and time/cost estimate can serve as basis documents for a tender process for a field trial EIA.

Work Package 3; Social Aspects for Baltic Sea storage of carbon dioxide finds the technical and commercial development of CCS has in some cases been impeded by public opposition. This report describes social factors, which may influence the plans for a Baltic Sea storage project, including:

These findings align with current literature on CCS and recent experiences from other European Union (EU) CCS projects. The general conclusion is that the collected material is not consistent enough to draw robust conclusions for a firm communication plan. The report provides insights though into which aspects should be considered, giving increased options to identify and responsibly handle the social conditions associated with a Baltic Sea storage project.

The Legal and Fiscal Aspects (WP4) report provides an analysis of the current and suggested legal framework that could regulate CCS activities. It also identifies potential barriers to CCS implementation. The evolution of a well-functioning legal framework for regional CCS operations is expected to be time consuming for which reason the early identification of potential hurdles is critical to all stakeholders. The report has its main focus on the EU CCS Directive and related pieces of EU law while taking a Swedish perspective.

A number of recommendations are given as input to the imminent (2015) revision of the CCS Directive. Among these are:

In particular, the rules on third party access to pipelines and storage sites are found to be quite vague at the EU level and thereby create room for problematic discrepancies between the Member States. The responsibility for transboundary CCS installations or structures is also under-regulated, causing significant uncertainties that should be addressed. As to the potential for storing CO2 captured in the EU, outside of the union, this is found to be impossible without significant amendments to applicable EU law. It is also concluded that further efforts should be made to enable transport of captured CO2 by ship, as it is currently not recognised by the EU emissions trading system (EU ETS), and that the inclusion of biogenic emissions under the EU ETS may also benefit the deployment of CCS in the Baltic Sea region.

Transport is considered the most technically mature part of the CCS supply chain. WP5, Infrastructure for CO2 transport in the Baltic Sea region reports that in this field the main consideration has been cost estimation rather than technology. There are however some technical issues related to the offshore discharge of ships, which need to be addressed.

The cost of CO2 transport by pipeline has been compared to the corresponding cost by ship for volumes and transport distances relevant to the Baltic Sea region. The results show that ship transport could be the preferable mode of transport with the lowest specific cost, for most of the CO2 sources in Finland and Sweden.

One conclusion is that the total capital investment required for developing the transport infrastructure necessary to cope with the volumes in question is so large that no single project operator will be able (or willing) to carry all the risk. Therefore, for the build-up of CO2 transport systems, public involvement will be required.

The presented cost estimates are in alignment with those of the two reference reports, the Zero Emission Platform 'Cost of CO2 transport' and the CO2 Europipe report, both from 2011. A marked difference though, is the higher absolute cost level, which is essentially due to the lower emission volumes per site and the longer transport distances in the region. The lowest specific cost for pipeline transport to the Dalders structure involves a large cluster concentrated around an SSAB steel plant in Oxelösund.

Shipping could simplify the CCS deployment decision making process, simply by offering a lower threshold for investment. In comparison with pipelines, ship transport requires lower capital expense, offers higher flexibility and near linear scalability. With the possibility of re-deploying vessels into another product segment, should the CO2 trade be reduced or aborted, it offers reduced capital risk than the pipeline business case.

As a final remark, continued geological assessment is required for both the Swedish territory and for the Dalders Monocline areas towards the Latvian sector, for which regional cooperation is an imperative. A Swedish demonstration project, for instance based on one of the SSAB blast furnaces in Oxelösund or the Cementa cement furnace in Slite on Gotland, could be facilitated by ship transport to the Dalders structure, thereby avoiding some of the current legal barriers.