Home > Insights > CCS is cheaper than renewables in producing hydrogen – what does this mean?

CCS is cheaper than renewables in producing hydrogen – what does this mean?

The Institute has been trying to raise awareness about the application of CCS outside of the power sector on behalf of the global CCS community for some time (see our fact sheet from mid-2016[1]). While interest groups and some media commentators continue to frame CCS in the heated ‘coal versus renewables’ debate, and even now as China’s much anticipated emissions trading scheme will begin by only covering power sector emissions, CCS in industrial applications is starting to gain much needed attention as informed policy-makers and emitters anticipate climate policy moving beyond the successful promotion of wind and solar PV.

The Deloitte Access Economics (DAE) report[2], recently released by Energy Networks Australia as part of its Gas Vision 2050 set of publications, reinforces the important role CCS can play in reducing emissions at least cost in sectors like heating and transport that pose specific decarbonisation challenges. Specifically, the hydrocarbons present in natural gas and coal can be converted into hydrogen and combined with capture technologies to generate a pure stream of waste CO2 that is ready for permanent geological storage. Hydrogen is an extremely useful zero-carbon product that can be combusted to provide heat for various domestic and commercial processes, be combined with fuel cells and is also an important feedstock in products like ammonia and in oil refining.

The potential role of hydrogen produced with CCS was highlighted recently in analysis prepared for the Institute by a team of world-renowned energy and climate experts led by the University College London Institute of Sustainable Resources.[3] Emission reduction scenarios examined using the TIAM-UCL model suggest that, under least cost/ optimised technology deployment pathways, hydrogen (as well as biofuels) produced via CCS would significantly displace oil-derived transport fuels. (The results are also useful in examining the greater role for CCS would likely play outside of the power sector in deep decarbonisation scenarios.) 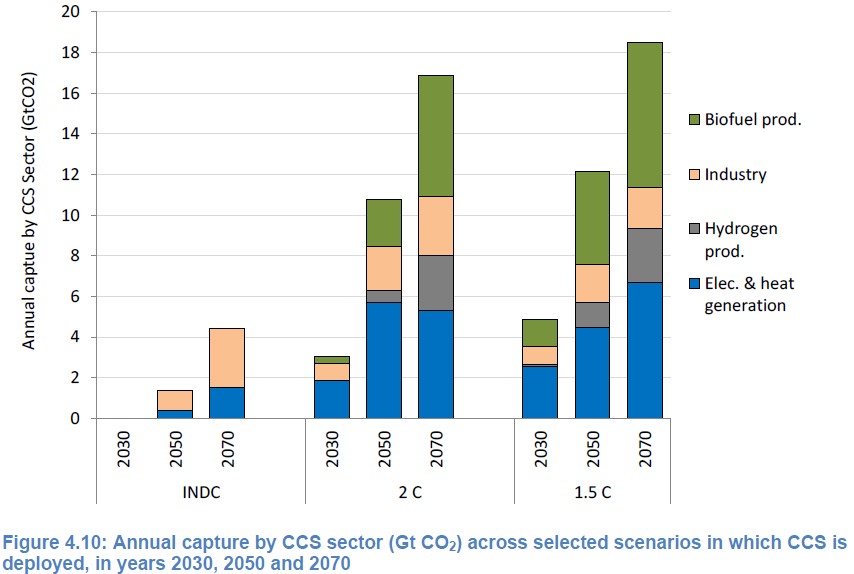 As is the story with CCS generally, the scale of emission reductions suggested in these least cost/ optimal scenarios is far beyond what is being undertaken today. The various hydrogen-CCS facilities in operation or planning also remain largely unknown outside of the CCS community. Facilities like Air Products[4] and Quest[5] in North America, and the Tomakomai Demonstration Project[6] in Japan, illustrate how large volumes of CO2 captured from hydrogen production can be safely reinjected into deep geological formations rather than vented into the atmosphere. Other projects like H21 Leeds City Gate[7] are in planning stages with broad government support, particularly since the UK Government is one of the few jurisdictions in the world today that actually has a long-term emission reduction target and thus a mandate to address emissions in all sectors of the economy. As my analysis for the Institute has found[8], and as might be suggested by the myriad of integrated assessment modelling of climate mitigation targets[9], there is a strong correlation between having such a long-term view and government support for CCS.

The Victorian Government is another jurisdiction that has recently legislated[10] a net zero emission reduction target and interim targets in accordance with the Paris Agreement architecture. Against this backdrop, the CarbonNet project, identified in the DAE report, is a Victorian Government-led initiative involving the establishment of shared use CO2 transport and storage infrastructure encompassing a variety of potential CO2 emission sources in eastern Victoria. One of these is likely to involve the conversion of Victoria’s hundreds of years’ worth of brown coal (which will be most definitely stranded under the Australian Government’s Paris commitments) into hydrogen for export to Japan.[11]

Using hydrogen from any source will contribute to reducing carbon emissions and should be supported, and the DAE report illustrates the relative cost of hydrogen produced from various sources. CCS is readily criticised by some energy commentators as being prohibitively expensive, particularly with respect to wind and solar PV generation, however in the case of hydrogen production the reverse is true – see figure below extracted from the DAE report. The DAE estimates are consistent with those recently published by the CSIRO. Note the figures for hydrogen from CCS include estimates of transport and storage costs, which while variable, are widely recognised to be quite low (~AUD$10 per tonne of CO2) in Victoria[12] given the proximity to suitable storage capacity near-shore in the Gippsland Basin. 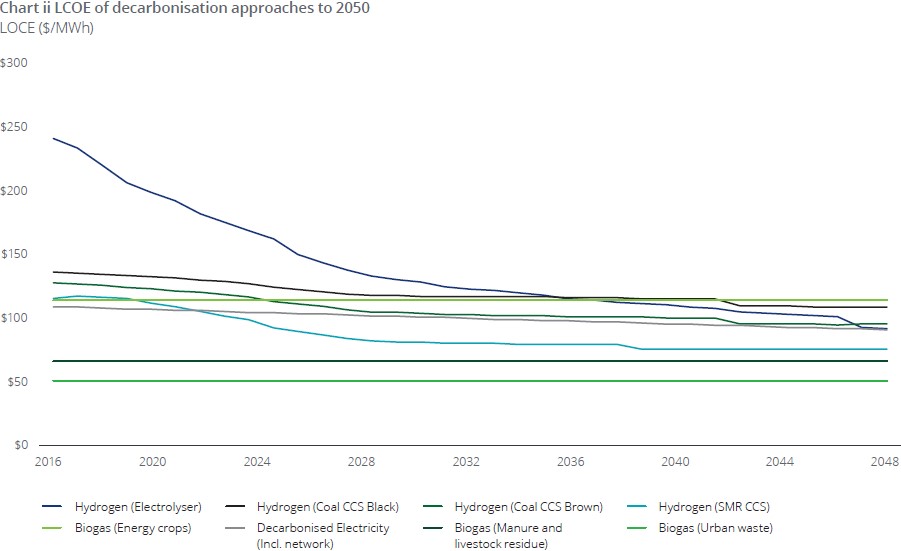 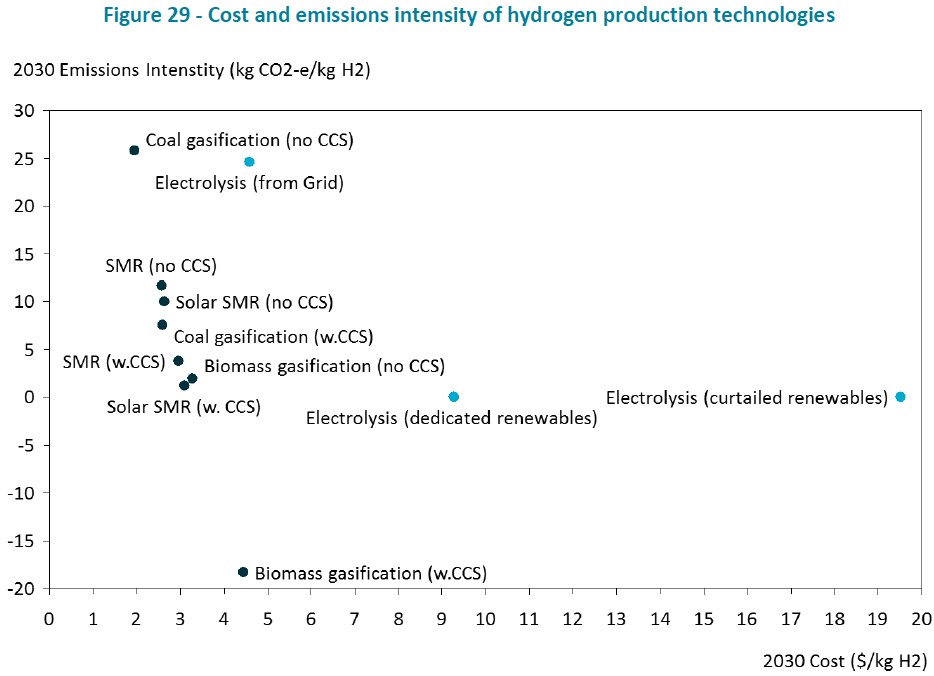 Both sets of costings depend on the source of electricity for electrolysis. Obviously there are important questions about whether and how much ‘excess’ or grid renewables might be available, including at which locations and times, and other variables affecting supply and pricing such as weather, availability of battery or pumped hydro storage, demand management and network investments which affect power flows. The prospects for hydrogen produced via CCS are also dependent on the infrastructure required to facilitate gas or brown coal conversion and CO2 storage, however the cost comparisons above suggest these options are already more favourable and prima facie they appear to be subject to less commercial/ market uncertainties than hydrogen via electrolysis.

However, and as with all comparisons between CCS and renewables, these costings are misused by advocates of all colours to push policy-makers and the public further along the polarising debate on the role of fossil fuels in a zero-carbon energy system. As the ‘better’ advocates would suggest, and as is reflected in the Institute’s recent policy submissions[14], the best approach to avoiding catastrophic climate change at least cost isn’t to champion or demonise technologies, but to jointly push governments towards higher levels of climate ambition and to implement policies that explicitly target greenhouse gases. All technologies have different, sometimes complementary, characteristics and should be given the opportunity to find their place in a rapidly changing energy system.