Induced seismicity is the term used to describe earthquakes caused by human activity. Engineering projects including mining, dams, or extraction and/or injection of fluids (for example oil and gas, water, or CO2) all have the potential to generate seismicity either directly (such as engineered underground explosions) or by altering natural stress fields within the subsurface. Most induced seismicity is of such a low magnitude that it cannot be felt by people at surface, and cases of actual damage to land or property caused by induced seismicity are rare.

Stress fields within the subsurface can be explained as the forces which result from complex processes associated with movements of the various tectonic plates which form the Earth’s crust. The deformation of rocks which results from these stresses is known as strain – which can be of two types, elastic or brittle. Most rocks exhibit gradual, elastic strain in response to stresses. However, the build-up of strain may eventually cause either brittle deformation resulting in the formation of fractures or faults; or, slip along existing fractures or faults. This brittle behaviour causes energy to be released in the form of seismic waves travelling through the subsurface. Natural, significant earthquakes typically occur when stresses cause a sudden reactivation of movement along an existing fault.

Induced seismicity also typically results from the movement of existing fractures and faults. However, these movements are generally very small and result in seismic waves that are below the threshold of where they can be felt – hence the term micro-seismicity is frequently used.

Fluids occupying pore spaces between mineral grains or in fractures, play an important role in the distribution of stresses and strains in most rocks. The extraction or injection of fluids into geological formations can therefore result in changes of stresses and strains that may lead to induced seismicity. For example, this has been a significant issue for enhanced geothermal energy projects, where fluids (typically water) are injected at high pressure to improve rock permeability through hydraulic fracturing. Similar hydraulic fracturing techniques are also employed by the oil and gas industry in unconventional reservoirs.

Injection and geological storage of CO2 in conventional oil and gas fields, or deep saline formations, does not require hydraulic fracturing. Nevertheless, changes in fluid pore pressures resulting from CO2 injection can generate micro-seismic events and need to be assessed as part of the risk management process for the design and operation of geological storage sites. The key to minimising and managing risks associated with potential induced seismicity is thorough characterisation of storage sites, to ensure that natural (baseline) stress and pressure conditions are understood in combination with the geological setting; injection operations can then be safely designed and operated within acceptable ranges of injection rate and pressure.

Monitoring data from a growing number of demonstration projects shows that micro-seismic events generated by CO2 injection are relatively low in both frequency and magnitude. Examples of such datasets have been gathered by the Decatur Project site in Illinois and the IEAGHG Weyburn-Midale CO2 Monitoring and Storage Project. 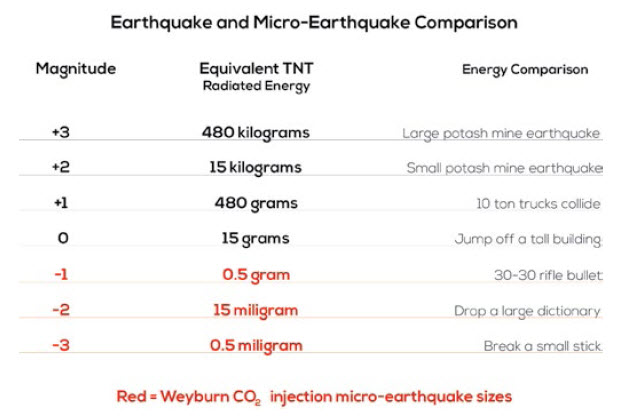 The table above, reproduced from a detailed study of the Weyburn-Midale project shows micro-seismic events recorded at Weyburn are tens to thousands of times weaker than the weakest earthquakes that could be felt by humans at ground surface. Note that only induced seismicity of magnitude +3 or above would be regarded as significant, whereas micro-seismicity is usually regarded as magnitude +2 or lower. A 2013 study by IEAGHG concluded that no induced events of magnitude greater than +1 had been recorded as a result of CO2 geological storage operations.

The interpretation of micro-seismic data requires detailed understanding of the geomechanics of the storage reservoir, storage complex and surrounding strata – but in turn can provide valuable insights into the progress of CO2 injection and a relatively inexpensive technique for monitoring the security of storage.

A paper recently published in the Proceedings of the National Academy of Sciences by Vilarrasa and Carrera concludes that induced seismicity is unlikely to cause large earthquakes or lead to leakage from appropriately selected and managed CO2 geological storage sites.

The paper sets out the following supporting arguments:

The authors also describe how the high clay content in typical sealing (caprock) layers leads to relatively low permeability across fault or deformation zones, reducing the chances of leakage even in the unlikely event that induced seismicity is generated at sufficient magnitudes to cause significant deformation.