Lessons learned from CCS development in the North of the Netherlands

The planning processes for developing and implementing new, innovative technologies like carbon capture and storage (CCS) take place in complex political, societal, economic and technical environments. Such planning processes can easily become intangible and complex due to their multi-level, multi-stakeholder and multi-issue characteristics. Gaining insight into the complexity and dynamics of these processes can help future developers, decision makers and other key stakeholders involved in developing new CCS (or other innovative energy) projects.

In this Insight, Barend van Englenburg from CMR Centre for Environmental Expertise and Hanneke Puts, TNO, present an overview of the Dutch planning process for CCS projects in the North of the Netherlands. They take the reader on a review of the the ‘Learning History’ approach, providing high level findings from a confidential research project into CCS in the the North of the Netherlands. Although the detailed results of this research project are confidential, by sharing the overall approach that was taken, the authors seek to pass on a variety of interesting lessons learned and recommendations for future innovative energy projects.

Authors: Barend van Engelenburg, DCMR Centre for Environmental Expertise, The Netherlands and Hanneke Puts, TNO – Strategy & Policy for Environmental Planning, The Netherlands. The Learning History study was part of the Dutch CCS Research Program CATO2 and was performed by the authors. Tara Geerdink and Mario Willems (both TNO) and Emma ter Mors (Leiden University) supported us in this study.

The planning process for CCS in the North of the Netherlands formally started in 2007 due to a political decision in the province of Groningen. The Government planned to connect the preparation of the two new coal fired power stations to CCS technology. The planning process more or less ended on the 14th of February 2011, after a decision by the Dutch Government to indefinitely postpone onshore carbon dioxide (CO2) storage in the Netherlands, mainly due to a lack of public support.

The focus of our research was to unravel and understand the planning process, including the roles, interests and interactions of the different stakeholders given the political and societal dynamics at that time. The aim of the project was to provide lessons to support future developers, decision makers and other key stakeholders for CCS projects, in order to improve the ability of developers to cope with the complex context in which the new technology has to be implemented. Moreover, these results are thought to be applicable for other innovative energy projects that have to be implemented in politically and socially complex environments, like wind energy or biomass projects.

The CATO2 Executive Board was keen on learning lessons from the CCS case in the North of the Netherlands, by composing a reconstruction of the planning process. However, some of the directly involved stakeholders were somewhat reluctant to participate in the proposed research project. Therefore, the CATO2 Executive Board agreed to support a confidential case study. According to the condition of confidentiality, the contributions of both the interviewees and the external experts have been processed anonymously.

Although the full document cannot be shared with anyone outside the group of stakeholders who have been participating in the Learning History study, we can share their lessons learned, along with the recommendations.The confidentiality of their input and the final results was highly important for the directly involved stakeholders: due to this condition they became willing to share their experiences and personal reflections in a very open way and even gave access to all documents which they found relevant for the reconstruction of the planning process.

As a systematic approach for the evaluation of (organisational) processes, the researchers at TNO and DCMR applied the so-called ‘Learning History’ (LH) approach. The rationale for this choice was the fact that the LH approach is not only descriptive and analysing, but also activates individuals and organisations to learn. The LH method is an organisational reflection process, in which researchers and stakeholders closely work together. In the late 1990s, George Roth and Art Kleiner at the Massachusetts Institute of Technology (MIT) in Boston developed the method, as a response to the limitations of more traditional assessments of organisational processes.

The strength of the LH approach is that it tells the story about the planning process of the CCS case in the North-Netherlands, from the perspective of the most relevant stakeholders involved. The LH is built on three levels:

The factual events and personal experiences of the stakeholders involved were gathered from a quick scan document analysis, 16 interviews with 20 stakeholders and two workshops. The interviewees originated from:

The LH was written based on these steps. Before the last workshop, five independent experts from science, government (2x), risk communication and industry were invited to reflect on the draft LH. These external experts were selected due to their knowledge of, and experiences with, similar planning processes in a complex and dynamic environments. (See Figure 1) 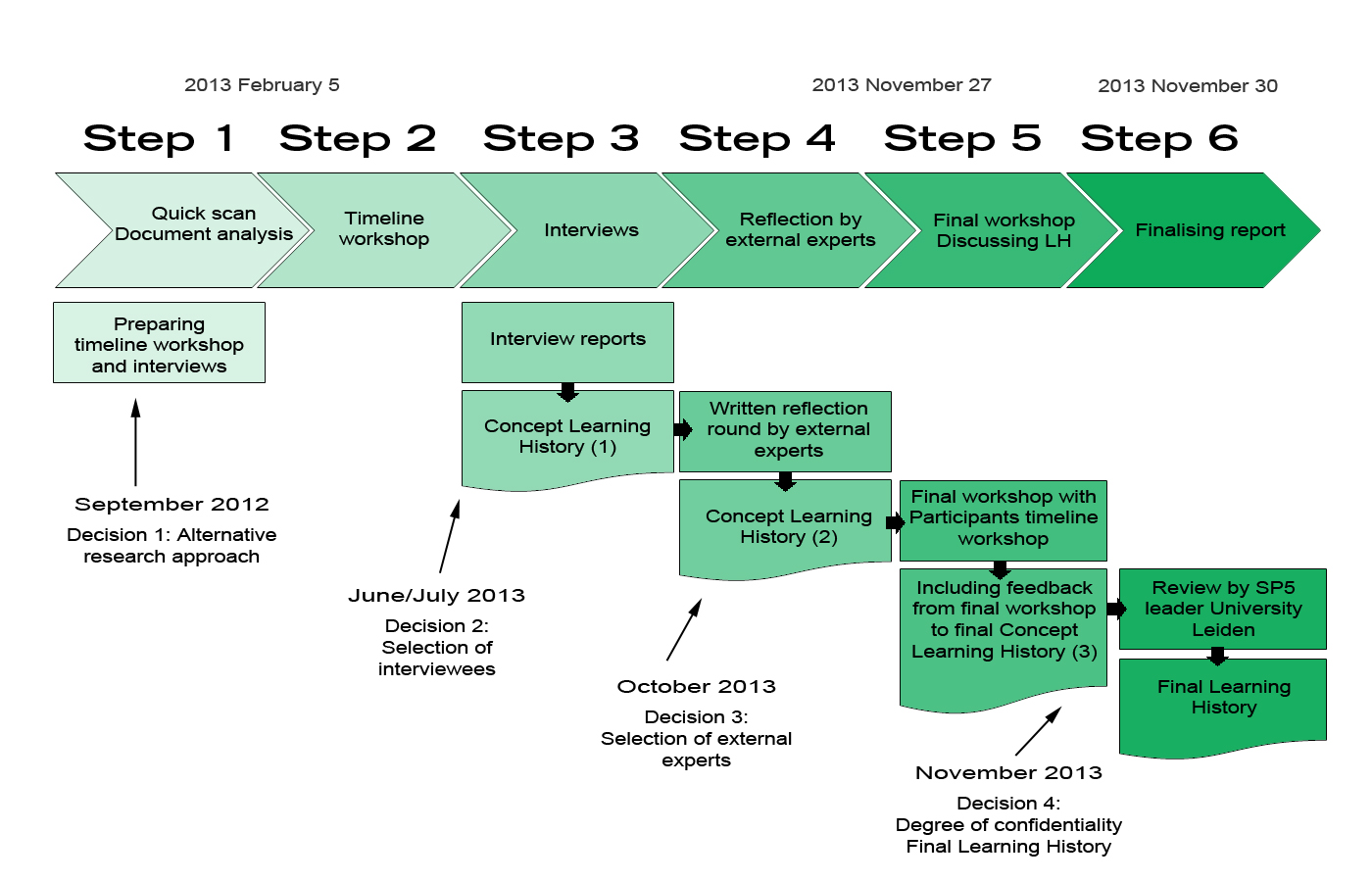 The final LH contains a detailed and actual description of the course of events regarding the planning process of the CCS initiatives in the North of the Netherlands, combined with personal experiences of involved persons and reflections of non-involved experts based on our confidentiality criteria outlined above.

We identified the following recommendations based on the lessons learnt and perspectives of the stakeholders involved. This included input from external, independent experts:

The above overview of the most relevant lessons learned and recommendations for new, innovative (energy) projects is the result of a Learning History approach, which attempts to tell the story through the eyes of the stakeholders involved. Although it is tempting to add our own observations and reflections to the list of recommendations, we have chosen to restrict ourselves from sharing personal observations and opinions in this first Insight. In a second Insight on this case study the authors will give their personal reflections on the described CCS case study and on what they have learned in a broader perspective.