Momentum for CCS Across the Gulf Cooperation Council is Growing

Climate Change in the GCC

The GCC region, consisting of the United Arab Emirates (UAE), the Kingdom of Saudi Arabia, Qatar, Oman, Kuwait and Bahrain is home to less than 1% of the global population and currently produces 25% of global oil and 11% of natural gas. The region’s oil and gas proceeds have been the bedrock of strong GDP growth, funding infrastructural development, creating employment, and are now provisioning economic diversification.

The states of the GCC are vulnerable to climate change and, as environmental changes intensify, will be acutely impacted. The already hot, dry climate of the region is likely to underpin worsening conditions for local populations. Summer averages are predicted to increase more than twice that of the global average, reducing arable land, putting massive pressure on constrained water supplies, and rendering some areas uninhabitable. Further out, looking toward the end of the century, sea level rise could prove devastating for low-lying countries in the region.

For the states of the GGC, this raises a dual and intertwined challenge - mitigating the impacts of climate change while also driving economic development and protecting their status as global exporters.

Looking to the Future

Early attempts to navigate what appear to be competing economic and environmental imperatives – and to deliver policy to connect the outcomes of each – are most visible in the variety of economic diversification plans the GCC states have launched. Some plans target structural reform, with others focusing on energy and environment. The United Arab Emirates established the 2021 vision, seeking to put education at the centre of future planning. Similarly, in 2017, the UAE launched the Energy Strategy 2050, which seeks to increase the contribution of clean energy from 25 to 50 percent by 2050 through a mixture of renewables, nuclear, and fossil fuels with carbon capture and storage (CCS).

Abu Dhabi – boasting the impressive Masdar City, home to the Global CCS Institute’s regional office and other intergovernmental organisations like the International Renewable Energy Agency – is specifically seeking, through the Economic Vision 2030, to diversify away from oil as a driver of economic activity toward knowledge-based industries. Qatar too is making significant progress. As the host of the 2022 FIFA World Cup, Qatar has pledged to make the tournament carbon neutral through innovations including solar powered stadiums and adaptations to save water and improve energy efficiency.

The Future of Hydrocarbons and CCS

The inherent challenge the GCC faces is that the region has over 3,200 GT of CO2 equivalent in fossil fuel reserves, far in excess of the remaining global carbon budget under both 1.5- and 2-degree warming targets. Approaching this set of interlocking issues with a lowest cost, lowest risk strategy values all emissions reduction options.

Saudi Arabia’s King Abdullah Petroleum Studies and Research Center (KAPSARC) has developed the circular carbon economy concept, a useful framework to better understand this principle. The circular carbon economy adds a fourth ‘R’ to the well-established ‘three Rs', making it reduce, reuse, recycle and remove. Remove includes measures which remove CO2 from the atmosphere or prevent it from entering the atmosphere after it has been produced.

Within this framework, the role of CCUS in climate mitigation and the energy transition in the GCC should not be understated. The technology suite can play a role across several key areas: enhanced oil recovery; bio-sequestration and bioenergy with CCS (BECCS); direct air capture (DAC); and the use of carbon in products.

Enhanced oil recovery continues to be the predominant use of captured carbon emissions across the GCC. As reported in the Global Status Report 2020, about 0.8 Mtpa CO2 is captured from the Emirates steel plant in Abu Dhabi as part of phase one of ADNOC's Al Reyadah project. Plans for phase two are in progress, with an aim to capture 2.3 Mtpa from the Shah gas processing plant for EOR. Phase three of this plan aims to capture a further 2 Mtpa from the Habshan and Bab gas processing facility, all together reducing ADNOC's operational CO2 intensity by 25 percent. Similarly, Saudi Aramco's Uthmaniya production (part of the Ghawar field) uses 0.8 Mtpa CO2 captured from the Hawiyah Natural Gas Liquids plant.

A factor making CCUS applicable and appealing for the GCC states is the proximity of large point-source emitters, particularly the power plants clustered along the Gulf coast. Total upstream emissions from GCC-based oil and gas companies are currently equivalent to almost a third of total emissions from the GCC, a percentage expected to increase by 20 – 30% over the next decade if no new initiatives are implemented. Where new coal plants are being proposed – namely in Oman and possibly the UAE – ensuring that emissions are captured and stored is essential to limit climate impacts.

Across the GCC states, hydrogen is emerging as an opportunity where several factors converge to provide a relatively unique competitive advantage. Some states are already using relatively large quantities of grey hydrogen. However, with significant potential demand for clean hydrogen emerging around the world – some estimates put the global market value at US$300bn by 2050 – blue and green hydrogen is becoming a focus area for the states.

Geography (access to markets), existing hydrocarbon production, a very low levelised cost of electricity and the regional potential for CCS can all converge to make GCC hydrogen exports highly competitive. 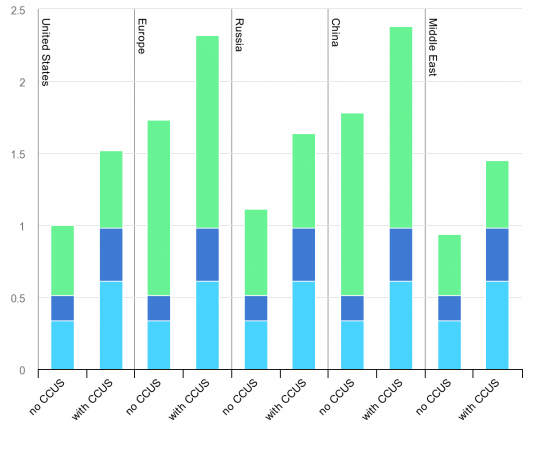 The final major application – at least as far as this Insight will cover – for CCUS is in decarbonising hard-to-abate industries. Iron, steel and cement plants, aluminium smelters and chemical and fertiliser plants all have a substantial carbon footprint in the region. Alongside ADNOC's Al Reyadah project, Saudi Basic Industries Corporation's (SABIC) CCS facility at the Jubail ethylene plant captures 0.5 Mtpa for use in methanol and urea production.

Within the context of global climate action, it’s feasible that the remainder of the decade may see unprecedented growth for CCS across the GCC. Some projections suggest CO2 captured could possibly rise to 40mtpa by 2040, which is approximately equal to the current global CCS capacity . As global momentum for CCS continues to grow, the region’s potential warrants close consideration.

Saha, S. (2019). How climate change could exacerbate conflict in the Middle East. https://www.atlanticcouncil.org/blogs/menasource/how-climate-change-could-exacerbate-conflict-in-the-middle-east