Present and Future: Australian CCS Policy Beyond the Federal Election

With an Australian federal election upcoming, climate change continues to rank as among the most important issues for business and the broader public. Although the immediate political focus has understandably shifted to cost of living issues, climate and energy will continue to play a considerable role in shaping other policy for the foreseeable future. This article provides a brief overview of each party’s climate and energy policy agendas insofar as they relate to carbon capture and storage (CCS).

The Australian Parliament represents a diverse polity, with a range of parties and independents in both the lower and upper houses. However, for the intents and purposes of forming government there are three main parties; The Liberal Party of Australia (Liberals), The National Party of Australia (Nationals or Nats), and the Australian Labor Party (ALP). The latter is likely to form government alone, while the Liberals and Nationals currently, and will if re-elected, govern as a coalition. In this brief article, focus remains on Government and Opposition CCS policy.

Each state and territory government has  pledged to achieve net-zero by 2050, most using 2030 interim targets to guide their efforts. However, the importance of federal climate policy leadership is clear when examining state-based interim targets. While some states are aspirational (Victoria, for example, is targeting 45 – 50 per cent, New South Wales 50 per cent, and the ACT 65 – 70 per cent by 2030), others like Queensland have committed to 30 per cent by 2030, and Western Australia is yet to set an interim target. Federal Government can guide and unify these efforts.

National climate leadership also matters on the international stage. When it comes to relationships with trading partners and engagement within multilateral forums like the Conference of the Parties (COP), it is clear that much is expected with regard to climate action. Further, where Australian business has largely acted to align with net-zero and global climate ambition, Government can both support and protect their efforts and trade opportunities.

Within this framework, the Government pledged $263M to CCS hubs and a further $300M in the handing down of the 2021-22 budget for hydrogen hubs in seven areas across the country. Further, the Government granted a share of $50M to six organisations through the CCUS Development Fund.

In mid-2021, the Government sought public consultation on the development of a methodology for CCS under the Emissions Reduction Fund (ERF) and later formally included it. Inclusion under the ERF means that eligible CCS projects will be able to earn Australian Carbon Credit Units (ACCUs), which can be sold through contract to the government or on the secondary market, providing access to financial incentive for project developers.

In December, prior to COP 26, the Government released Australia’s Long-Term Emissions Reduction Plan, a net-zero by 2050 plan. The plan seeks to reduce emissions by up to 35 per cent (based on 2005 levels) by 2030 and achieve net-zero by 2050 through the core policy tenets of driving the cost of technology down and partnering with business to realise deployment at scale. Adding to the solutions under the Investment Roadmap, the Reduction Plan added ultra-low-cost solar, grid digitisation, low emissions cement, and livestock feed supplements to the list of technologies it would actively support in pursuit of net-zero. 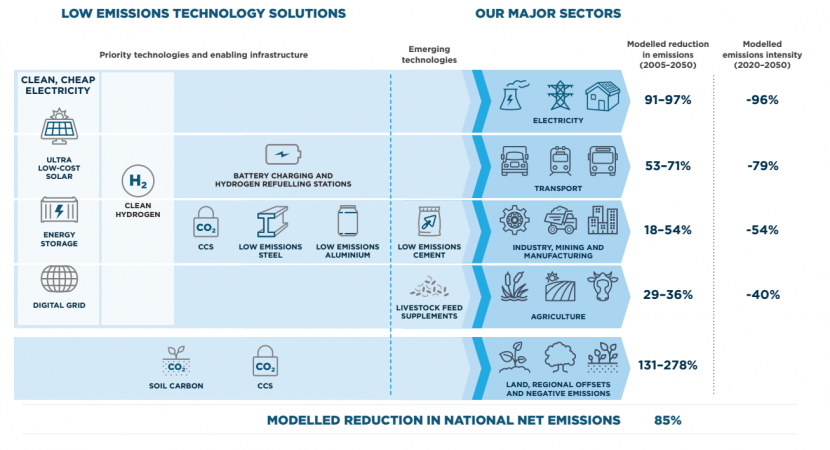 The Government has also sought to expand the mandate of the Australian Renewable Energy Agency (ARENA) and the Clean Energy Finance Corporation (CEFC) to allow both to fund the technologies in the Investment Roadmap, including CCS projects. As at the time of writing, the new regulations to allow CCS investment from ARENA have not progressed. Legislation to expand the remit of the CEFC has also not progressed.

In handing down the 2022-23 Federal Budget, the Government outlined funding opportunities for CCS including $300M to support low emissions LNG and clean hydrogen production at Darwin (with associated CCS infrastructure), $200M for new low emissions manufacturing facilities (including CCS) in the Pilbara region, and $50M to accelerate the development of priority gas infrastructure projects and support investment in CO2 storage pipeline infrastructure.

In December Labor released its Powering Australia document, which outlined its specific plan to achieve net-zero emissions. As part of the plan, Labor has adopted a 2030 emissions reduction target of 43 per cent (based on 2005 levels) and has said it will legislate a net-zero 2050 pledge if the party forms government. Powering Australia hinges on several central policies:

Central to ALP climate and energy policy is the strengthening of baselines under the Safeguard Mechanism. The Safeguard Mechanism was established under the Coalition to work in synchronicity with the Emissions Reduction Fund. Effectively, industrial facilities emitting above the threshold of 100,000 tonnes a year of carbon dioxide-equivalent (CO2-e) have a limit (or baseline) set on emissions so as to avoid them rising and have been required to purchase offsets where the baseline was exceeded.

While the Coalition Government aims to drive technology costs down so that they will be adopted into ubiquity by facilities both large and small, Labor seeks a policy focused on lowering the baselines (essentially reducing the amount largescale facilities can emit) over time, allowing these facilities to achieve reductions in whichever way they see fit. In this context, facilities covered by the Safeguard Mechanism may apply CCS to achieve their emissions reduction targets, both under the mechanism and internal. Labor has frequently referenced that the Business Council of Australia (whose membership consists of some high-emitting companies) suggested this plan in their 2050 net-zero plan, also released in 2021.

The ALP’s 2021 National Platform, outlining its federal policy positions, stated that the party “supported the advice of experts including the Chief Scientist and the Intergovernmental Panel on Climate Change…” and that it “recognises the role that Carbon Capture and Storage (CCS) will play in abating carbon pollution and ensuring industries like heavy manufacturing and gas production are able to play their role in meeting carbon pollution reduction goals consistent with achieving the goals of the Paris Agreement.”

It is worth noting that existing incentive structures for CCS development (including the ERF) will remain in place if Labor were to form government.

There is a clear role for CCS in Australia’s net-zero journey, regardless of which party forms Government following the May election. If Australia is to manage the fine balancing act between decarbonisation and energy security, maintaining its competitive advantages and regional leadership in resource exports, CCS is essential. The applications, ranging across natural gas processing, clean hydrogen production, manufacturing, and carbon removal, are broad and can support an equitable transition for many regional resource-reliant communities.

The two approaches outlined in this Insight have potential to find greater commonality. Explicit financial support for CCS is certainly important but should be set against a backdrop of aspirational interim emissions reduction targets and come with clear decarbonisation expectations for industry. Similarly, setting clear targets for national and industry emissions reductions will likely prove critical, and should continue to be met with support for technological solutions and co-investment.

Beyond point source capture projects, there is scope to provide a policy basis for direct air capture and storage (DACCS), bioenergy with CCS (BECCS), and utilisation projects (CCUS), all of which are currently largely without support or incentive. As the Clean Energy Regulator continues to develop methodologies to include CCS technologies under the Emissions Reduction Fund, the Federal Government (beyond the election) should seek further opportunities to incentivise the development and deployment of CCS.