I write this on the last day of the World Future Energy Summit, an annual event in Abu Dhabi that has become one of the world leading clean energy and sustainability events. Some background: the World Future Energy Summit (WFES) brings together over 30,000 policymakers and business leaders from 170 countries in the pursuit of a secure, safe and reliable source of energy to power world economic growth. The event is hosted by Masdar and is the centrepiece of Abu Dhabi Sustainability Week.

In November 2014, the Institute held its International Members' Meeting in Abu Dhabi, where delegates were impressed by the clear potential for capture, utilisation and storage (CCUS) to play a role in enabling countries in the region to deliver on their sustainability goals. I was curious therefore to see to what degree carbon had been accepted as part of the WFES agenda.

Strongly supported by IRENA, the International Renewable Energy Agency, the summit conference itself has a clear focus on renewable energy, and CCUS technology did not really feature in the official program. However this did not mean that CCS was entirely absent from proceedings.

Masdar and the Abu Dhabi National Oil Company (ADNOC) made headlines late last year when they announced the formation of a Joint Venture company “Al Reyahda” (‘the Pioneers’), the Abu Dhabi Carbon Capture Company. The company’s first project, the Abu Dhabi CCS project, attracted a number of high level delegations during the week, including visits from the European Commission and the United States Government. On the first day of the Summit, Masdar, the US Dept of Energy and the United States Energy Association hosted a summit side event focussing on “CCS in the Post Kyoto world”. High calibre speakers, which included Maria van der Hoeven (Executive Director of the IEA), Marie-Jose Nadeau (Chair – World Energy Council), Dr S Julio Friedman (Deputy Assistant Secretary for Clean Coal, Office of Fossil Energy, US Dept of Energy), and His Excellency Dr Matar Al Neyadi (Undersecretary, UAE Dept of Energy) spoke passionately about the role that CCUS will play in meeting climate and energy goals, both internationally and in the region.

Maria van der Hoeven made a strong and pragmatic case setting out the need for CCS, noting that "While investment in renewable energy has increased heavily in the past decades, all of this investment has been overshadowed by even larger investment in fossil fuels, and this is for perfectly good reasons... Fossil fuels are at the heart of economic development in many countries... and ...emerging economies develop these resources because they need them to power their growth, to relieve poverty, allow access to energy and ensure the livelihood of cities and industries, and this is exactly why CCS is absolutely necessary".

@IEA's @VanderHoeven_M: I want this (#ADSW) to be the Davos of renewable energy and sustainability.

His Excellency Dr Matar Al Neyadi, Undersecretary, Ministry of Energy, United Arab Emirates explained the importance of CCS to the UAE economy, stating that, "From a climate change perspective we believe that through the successful global deployment of CCS technology, global CO2 emissions can be significantly reduced, while maintaining economic growth and development aspirations."

It was extremely pleasing to see the clear and unambiguous level of support CCS enjoys from these globally influential organisations.

On the floor of the exhibition CCS was also making an impact. Shell had brought its renowned CCS elevator to the event. The popular installation takes visitors on a simulated journey below the earth to help visitors understand CCS technology and the fate of sequestered carbon dioxide (CO2). Shell also made a number of presentations to visitors showcasing their CCS activities across the world. Statoil had a significant presence, with its considerable experience in CCS clear from the poster presentations on Sleipner/Snovit , and BP and Occidental also had their CCS and CCUS credentials very much on display in the form of exhibits and briefings. Other companies with interests in CCS technology such as Mitsubishi Heavy Industries, JOGMEX, INPEX and KEPCO were also present. 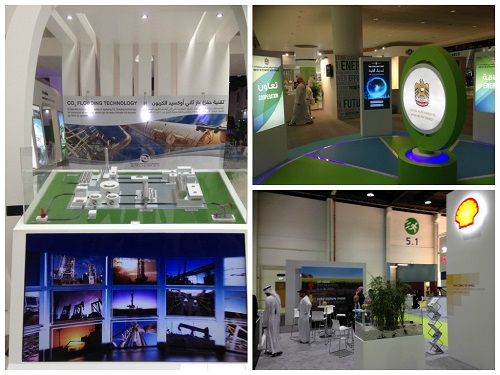 Meanwhile Al Reyadah and Emirates Steel ensured that the Abu Dhabi CCS project was visible, with exhibits and staff members explaining the importance of the project to exhibition visitors, which included a large number of students and school parties.

While it seems CCS has some way to go before being fully embraced by the wider clean energy community, it seems that the technology is becoming increasingly visible at WFES. The challenge for the CCS community globally is to work together to ensure that CCS and CCUS moves from the side event to the main event, and starts to achieve due recognition for the important role it has to play in a low-carbon portfolio. 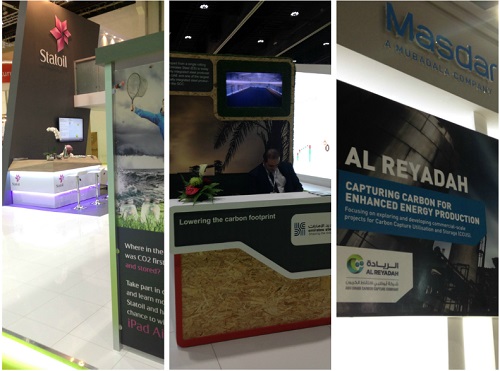 Stands from major companies involved in research and operation of CCS