Home > Insights > The Institute and the United Nations – A Snapshot

The Institute and the United Nations – A Snapshot

The global nature of the Institute means that it is uniquely positioned to represent the global CCS community at the highest level. Over recent months, the Institute has worked intensively with a number of the constituent bodies of the United Nations (UN) to promote the economic and mitigation potential of CCS technology.

One of the best known elements of the UN is the international climate treaty called the United Nations Framework Convention on Climate Change (UNFCCC). The Institute is an accredited observer to both the Convention and the Kyoto Protocol, and was recently heavily engaged in COP-20 in Lima. However, while the end of year COP is the most visible event on the UNFCCC’s year, much of the work is done in lower profile, but equally as important sessions throughout the year which sees negotiators work long hours to develop recommendations for consideration at COP. In order to advocate for CCS within UNFCCC arrangements, it is vital that the institute is present at these ‘working events’ as well as during the high drama and theatre of the COP.

A good example of this is the Ad Hoc Working Group on the Durban Platform for Enhanced Action (ADP), which meets a few times throughout the year, and provides excellent opportunities to work with Parties (country negotiators) and other bodies with an interest in CCS to improve understanding of the technology. Most recently, the ADP hosted (at the request of Parties) a Technical Expert Meeting (TEC) on CCS and CCUS in Bonn in October 2014. The Institute worked closely with the UNFCCC Secretariat and other partners such as the IEA to deliver a successful event that saw CCS practitioners such as Statoil, Saskpower and Shell, as well as Parties such as the UAE Ministry of Foreign Affairs present their views and facts on CCS.

Other parts of the United Nations are also becoming involved in CCS. The United Nations Economic Commission for Europe (UNECE) was established in 1947 to encourage economic cooperation among its member states. It is one of five regional commissions under the administrative direction of UN headquarters. Besides countries in Europe, it also includes Canada, the Central Asian republics, Israel and the United States of America.

One of the key outputs from the UNECE Group of Experts on Cleaner Electricity Production from Fossil Fuels in 2014-15 was the submission of a suite of recommendations to the UNFCCC on how to better support the role that CCS/CCUS must play in reducing GHGs.

In a recent opinion piece titled “Capture the Carbon”, Christian Friis Bach, executive secretary and under-secretary-general of UNECE, said "I will admit that just a few years back I was very sceptical. Today I am convinced that we must do it. We must capture the carbon dioxide emitted from burning fossil fuels"

(On a related note, the Institute assisted the UNECE Group of Expert in preparing the recommendations on CCS in clean energy production and EOR and will continue to be engaged in the UNECE activity providing expertise to its CCS related Task Forces)

In November 2014 UNECE member States agreed on recommendations to the UNFCCC on how CCS and CCS for Enhanced Oil Recovery (EOR) should be treated in a Post-Kyoto Protocol Agreement.

As UNECE’s Christian Friis Bach says “The technology is feasible. It is expensive but it will be much more expensive not to do it. … CCS technology should be developed and supported on a comparable basis with other no carbon or low carbon technologies”.

The United Nations Economic and Social Commission for Western Asia (UNESCWA) is based in Beirut and has a similar role to UNECE focused on the Middle East. Its member countries include Saudi Arabia, the UAE, Qatar, Kuwait, Iraq and Oman, all countries with considerable potential for CO2 EOR. The Institute has partnered with UNESCWA in a number of its initiatives in promoting CCUS in the Middle East, most recently through our participation in an expert workshop held in Abu Dhabi in January 2015. The workshop “Using CO2-EOR in the Gulf States to Reduced CO2 Emissions” attracted participants from Governments, industry and academia from across the Middle East and further afield to explore opportunities to promote the use of CCUS in the region. The Institute’s GM EMEA presented the Institute’s view on ‘Climate Change, the UNFCCC and EOR” as part of a suite of expert presentations and panel discussions. 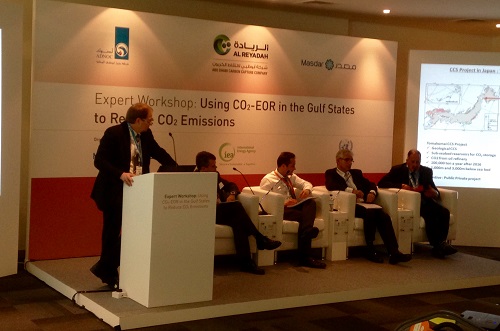 A call for action

The Institute’s view is that notwithstanding the close collaboration it enjoys with a number of UN bodies, the UN system generally and UNFCCC specifically could and should do more to promote CCS mitigation.

The UNFCCC Technology Mechanism and Financial Mechanism must equally support all clean energy technologies, and the nature of the relationship between the Climate Technology Centre and Network (CTCN) and the Green Climate Fund (GCF) will be vital. The 2015 Agreement should enable deployment of a suite of clean energy technologies (including CCS) to move through the demonstration phase. To help enable this, CCS needs a UN Institutional organisation to champion the technology in the same way that the United Nations Environment Programme (UNEP) is promoting and raising the profile of renewable technologies.

Significant wins have been achieved through the collaboration of the Institute together with members of the CCS community and UN bodies.

The road to Paris

In the 12 months or so that will lead to COP 21 in Paris, the Institute will continue to work with UNFCCC, UNECE, UNESCWA and other UN bodies to promote the role CCS can and must play in support of national, regional and international emissions reduction commitments as well as the UNFCCC meet its climate goal.