On March 7, the Global CCS Institute hosted a briefing on carbon capture’s role in California’s energy transition in the state’s capital. The event was attended by policymakers, stakeholders, ENGO representatives and staffers based in Sacramento. The briefing was an opportunity for participants to learn about the latest scientific insights, climate models, analysis and key information on carbon capture and storage (CCS) and its role in the energy transition. Speakers included Sally M. Benson, Professor of Energy Resources Engineering and Co-Director of the Precourt Institute for Energy at Stanford University; George Peridas, Staff Scientist at Lawrence Livermore National Lab; Deepika Nagabhushan, Energy Policy Associate at Clean Air Task Force, and the Institute’s own Senior Advisor Lee Beck.

California, given its ambitious climate goals to achieve zero-carbon electricity by 2040 and a carbon-neutral economy by 2045, its first-class geology and its ambition to be a global climate action leader, is an ideal place for the deployment of carbon capture and storage (CCS) – particularly in the hard-to-abate sectors.

Last September, California’s low carbon fuels standard (LCFS) was amended with a protocol for CCS, allowing lifecycle emissions reductions of fuels as well as direct air capture projects globally to participate in the credit market while stacking the incentive with the current federal tax credit also known as 45Q.

The briefing gave an overview of the role of carbon capture and storage in the Intergovernmental Panel on Climate Change’s (IPCC) Report on Global Warming of 1.5 degrees and its different scenarios that lead to reaching the Paris Agreement targets. The discussion also emphasized the need for immediate action and to consider all options of decarbonization given the scale and timeframes to solve the climate challenge. 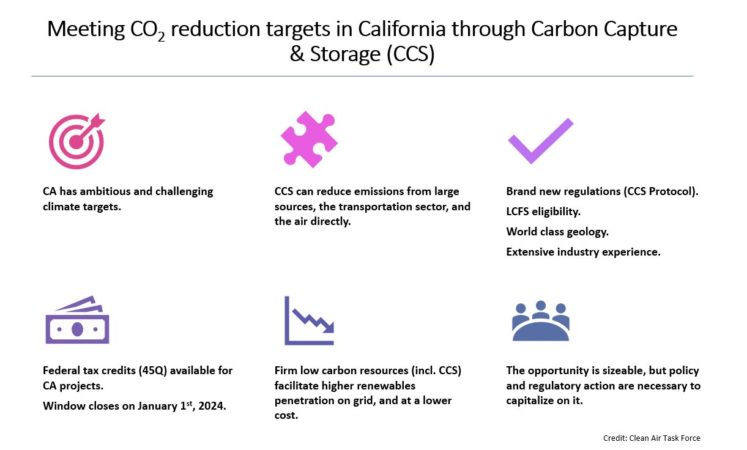 The Institute presented CCS’ role in the IPCC scenarios, as well as the key takeaways from its Global Status of CCS: 2018 report. Professor Sally M. Benson provided a high-level overview of CCS technologies and applications. She also presented her research that addresses the increasing challenge of renewable energy grid integration without the availability of clean and dispatchable back-up power. Deepika Nagabhushan and George Peridas put forward key recommendations to help accelerate the deployment of CCS through creating an enabling policy environment, as well as the implementation of the LCFS.  Further recommendations include the reform of the cap-and-trade system to increase its credit value and include CCS as an eligible offset mechanism, the creation of further value streams through for example inclusion of CCS in the electricity portfolio standard as well as investment in technology R&D.

The ensuing discussion focused on safety of geologic storage, CCS cost, the implications of 45Q design, as well as direct air capture and site permitting.