The Japanese Ministry for the Environment (MOE) hosted a significant international symposium on Carbon Capture Utilisation and Storage (CCUS) in Tokyo on 21 February. Organised in cooperation with the Global CCS Institute, the symposium was very well attended with the venue ultimately limiting participation to 260 delegates.

The commitment of the Government of Japan to CCUS was demonstrated by the symposium being opened by the Minister for the Environment, the Honourable Yoshiaki Harada. His speech delivered a very clear message emphasising the urgency of rapidly deploying CCUS to reduce carbon dioxide emissions, and his expectation that private and public sector entities work together to achieve this goal which is necessary to meet climate targets. Everyone in the room was certainly energised and encouraged by Minister Harada’s opening address.

Delegates then enjoyed presentations from seven leading speakers who shared their perspectives and insights on CCUS. Mr Hiroshi Ono, Deputy Director General, Global Environmental Affairs, Japan MOE, Mr Jarad Daniels, US Department of Energy, and Mr Brian Allison, UK Department of Business, Energy and Industrial Strategy, each spoke about their respective governments’ policies and approach to deploying CCUS. A common message from all three of these leading governments (Japan, UK and USA) was that they are deploying significant resources for RD&D, and fostering deep international collaboration to accelerate the deployment of CCUS. 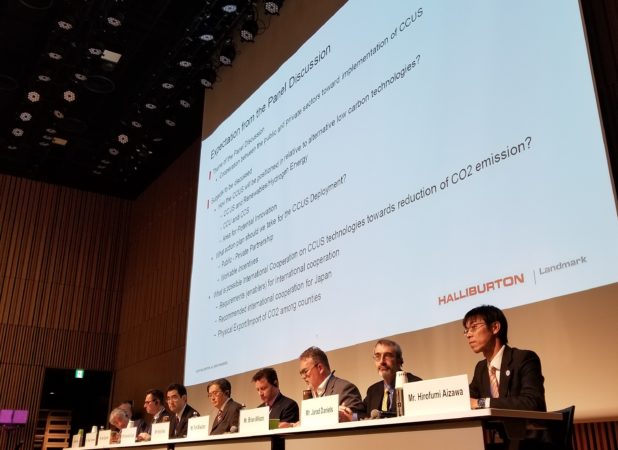 The second session included presentations on large scale CCUS facilities. Mr Tim Wiwchar, Shell Canada, and Mr Kenji Aiso, President, Osaki CoolGen Corporation, described the Quest and Osaki CoolGen facilities. Quest, which captures and stores carbon dioxide from a hydrogen production plant is operating in Canada whilst Osaki CoolGen in Japan is progressing to phase two which will involve capturing carbon dioxide from an Integrated Gasification Combined Cycle plant. These facilities demonstrate how government and the private sector can work together to deliver solutions to climate change.

Two speakers from Toshiba, Mr Kensuke Suzuki and Mr Satoshi Mikoshiba, opened the third session describing Toshiba’s activities in CO2 capture and utilisation, which include the design and construction of the Mikawa capture demonstration project and development of artificial photosynthesis. The final speaker was the Institute’s General Manager Commercial, Alex Zapantis, who shared the results of recent research conducted by GCCSI on the fossil fuel divestment campaign and the link between CCS and ESG ratings. All speakers, joined by Mr Hirofumi Aizawa, Climate Change Policy Division, MOE, then participated in a panel discussion focussing on cooperation between the private and public sectors to implement CCUS.

The entire event was MC-ed by Dr Makoto Akai, a former Global CCS Institute board member with 30 years of experience working on CCS.