This interesting perspective on advanced coal technologies' role in meeting the climate challenge was written by Janet Gellici, Executive Vice President and Chief Operating Officer of the National Coal Council (NCC). It was first published on BRINK on 10 July, 2015 and is republished here with permission from the author.

The current number of CCS demonstration projects that are in operation or under construction worldwide is 22; the projected need by 2050 is 3,400. The current global CO2 storage capacity is 40 million tons per year; the projected need is 10 billion tons per year. Without adequate demonstration there can be no commercialization. And there is no point in capturing CO2 if there is no place to use it or store it.

In advance of the COP21 climate negotiations in Paris late this year, nations are committing to ambitious GHG emissions reduction pledges. Complying with these commitments will require a variety of approaches, including enhanced conservation/energy efficiency measures, expanded roles for renewables, nuclear power and natural gas, and, most importantly, deployment of advanced coal technologies capable of reducing, capturing, utilizing and storing CO2.

CCS and HELE coal technologies are critical components of GHG reduction plans because they are the only large-scale options that can mitigate CO2 emissions from oil, natural gas and coal used for electricity generation and key industrial sectors, such as cement, iron and steel production, oil refining, and chemicals manufacturing. These advanced coal technologies are also our best bet for achieving the largest amount of CO2 reductions at the lowest possible cost. 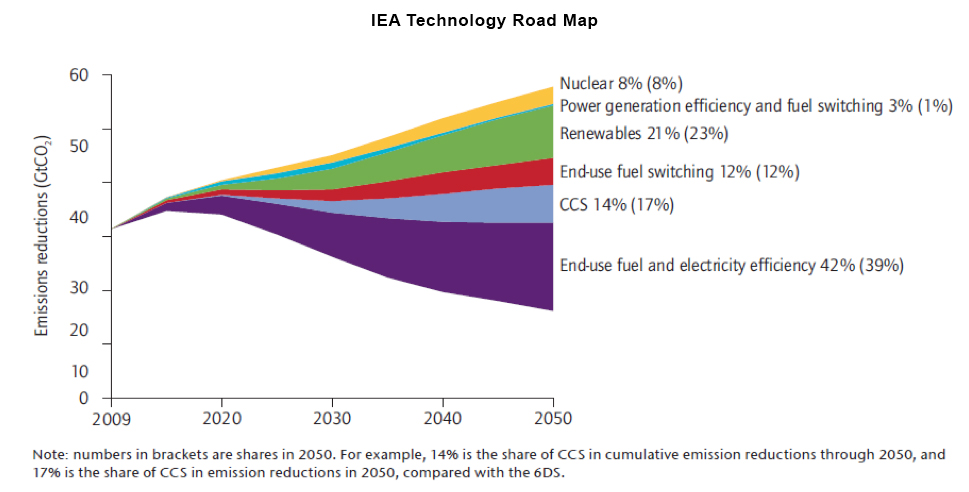 The magnitude of the challenge associated with capturing, storing and utilizing CO2 is tremendous. In 2013, global CO2 emissions totaled 36 billion tons and grew at a rate of 2.1 percent for that year. Based on that growth rate, the calculated, cumulative total of CO2 emissions in 2050 would be 2,062 billion tons. Of these, the International Energy Agency (IEA) estimates that only 884 billion tons could be safely emitted to meet a GHG emissions reduction goal limiting CO2 to 450 parts per million (ppm).

IEA has found that a diverse set of technologies will be required to meet this goal. According to IEA’s Technology Roadmap, CCS would need to provide about 14 percent of the cumulative emissions reductions by 2050. The agency assumes significant efficiency improvements (42 percent) and growth in renewables (21 percent). If either of these does not occur at the levels indicated, it’s likely that fossil fuels will be the fallback option, filling the gap for power generation. Widespread global deployment of CCS would serve as a scalable hedge against failure to achieve renewable or efficiency goals.

It’s unlikely that global CO2 emission reduction goals can be met without CCS; it’s even more improbable that these goals could be met without increasing the net cost if we do not deploy CCS technologies. IEA has estimated that the exclusion of CCS as a technology option for the power sector alone would increase mitigation costs by around $2 trillion for 2050. This represents a 70 percent increase in mitigation costs due to the higher estimated expense associated with alternatives such as renewables. 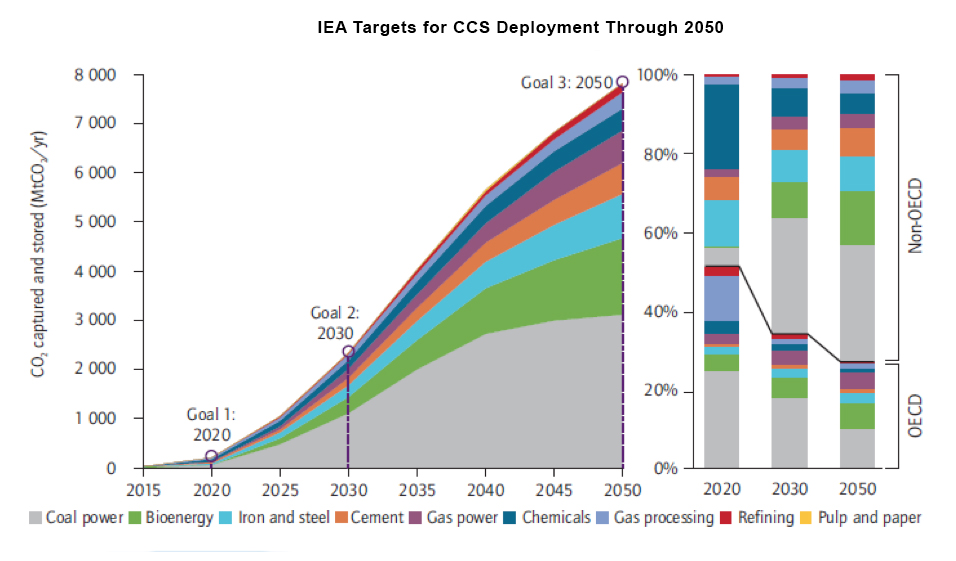 The strategic importance of CCS was also well documented by the International Panel on Climate Change (IPCC) in its 5th Assessment Report. The IPCC concluded that the CO2 mitigation cost without CCS would increase by about 138 percent (median estimate). By comparison, a nuclear phase out would increase the median cost by only about 7 percent; if wind and solar expansion were limited, the increase in global mitigation costs would increase by only about 6 percent. Meeting climate goals will be significantly more expensive without CCS.

In a recent study conducted at the request of the U.S. Secretary of Energy, the National Coal Council (NCC) provided an assessment of the U.S. Department of Energy’s (DOE) efforts to bring scale and speed to the deployment of CCS. NCC found that while DOE is indisputably a world leader in the development of CCS technologies, its CCS program has not yet reached critical mass. While there have been some successes, there is a need for a substantial increase in the number of large-scale demonstration projects for both capture and storage technologies before either system approaches commercialization.

In order to achieve CCS deployment at commercial scale, policy parity for CCS with other low carbon technologies is required. Policy parity for CCS would provide more energy options to meet growing global energy needs, ultimately reduce the cost of GHG mitigation and contribute to global CO2 reduction goals in a timely fashion.

Control of CO2 emissions is an international issue in need of international initiatives. COP21 Paris provides a meaningful opportunity for world leaders to support investment in low emission coal technologies. A failure to do so risks a failure to meet our climate objectives.