The research presented in this report presents the results of a large group workshop process, developed in Australia that was replicated across four different countries to engage a cross section of the community. The countries selected were chosen on the basis that carbon capture and storage (CCS), a technology to prevent large amounts of carbon dioxide (CO2) being released into the atmosphere from the use of fossil fuel in power generation and other industries is being seriously considered as a mitigation option by governments in those countries and included the Netherlands, Scotland, Canada and Australia.

The main aims of the research were to:

The study assesses the impact of the information and the process on individual knowledge, attitudes and behaviours, and analyses individual views on the potential solutions for mitigation, including CCS, and how these views change as a result of the workshop.

In total 374 participants attended the workshops. The workshop in the Netherlands was attended by the highest number of participants (n=111), followed by Scotland (n=99), Canada (n=80) and Australia (n=841).

The results indicated that the workshop was successful in increasing participants' self-rated knowledge about CCS and the portfolio of energy technologies. As in previous research, there was strong support for renewable energy and concerns expressed over any investment in CCS at the expense of renewable energy development. It was also apparent that country context does impact on energy technology preferences. The samples in Australia and Canada – which export a large component of their fossil fuels – were more positive about the role of CCS compared to those in the Netherlands and Scotland.

The results suggest that the process was successful in gaining citizens' participation and investment in sharing information about energy issues, particularly evidenced by the increase in group identification over the course of the workshop. This seems to indicate, that little was lost by engaging up to 100 people in the room, rather than the normal dozen that would likely participate in a focus group. As such, the process has evident potential to be used to engage larger numbers within a local community about CCS, as it provides a way to access participants’ opinions and allow them to feel that they have been heard. This is in contrast to the more traditional town hall style meeting, where only the loudest voices tend to be acknowledged and can have the greatest influence on the outcome. 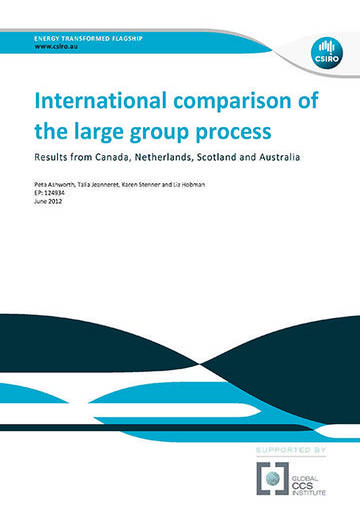