Home > Publications > The LCFS and CCS Protocol: An Overview for Policymakers and Project Developers

The LCFS and CCS Protocol: An Overview for Policymakers and Project Developers

The Global CCS Institute has launched a report analyzing California’s recently passed carbon capture and storage protocol. The report provides a summary of the regulation for project developers and policymakers in other states and countries, given the Protocol's global applicability. While comparing it to other relevant regulations – including the federal carbon capture tax credit also known as 45Q – the report seeks to raise awareness for the opportunities created through the protocol and to advance deployment opportunities.

The protocol incentivizes carbon capture and storage projects reducing the lifecycle emissions from bioethanol, hydrogen, and crude, provided the fuel is sold into the California market, as well as direct air capture projects globally. 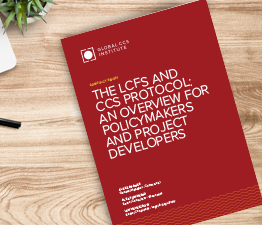